The White River Alliance hosted the state’s first water summit this week. The two-day event brought experts together to take a closer look at how Indiana can protect its water resources.

Climate issues were on speakers’ minds. As temperatures rise across the globe, the demand for water is expected to go up.

Rep. Carey Hamilton (D-Indianapolis) was one of the speakers. She’s also part of the newly-formed Water Infrastructure Task Force — a group assigned to study the state’s water systems and develop a plan to tackle drinking and wastewater needs in Indiana.

Hamilton says all stakeholders need a seat at the table as the state forms this complex plan.

“Whether it be communities that are concerned about providing clean drinking water to the recreational outdoor industry to industries that rely on water to make their products and agriculture, for example,” she says.

Jack Wittman is the vice president of Intera Geoscience & Engineering Solutions. He says Indiana uses most of its groundwater for public water supplies — like drinking water — and only a small portion is used to water crops. However, Wittman says irrigation in the state is increasing like never before. 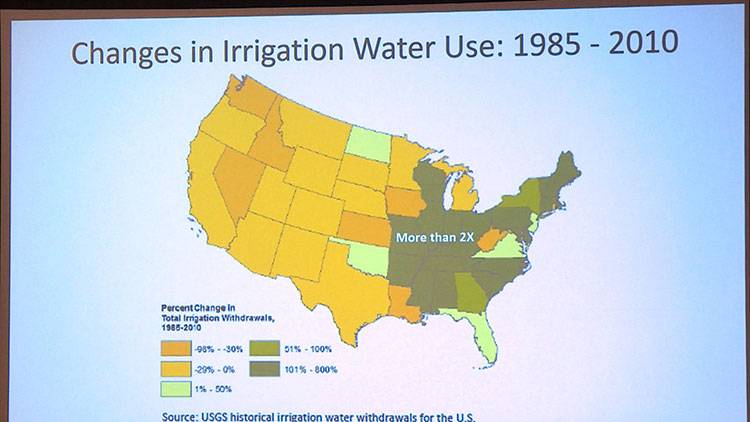 A slide illustrates the changes in irrigation water use from 1985 to 2010. (Rebecca Thiele/IPB News)

“Agriculture becomes almost as big of a user of water during the three summer months as public supplies — and this is statewide,” he says.

Melissa Widhalm coordinates the Indiana Climate Change Impacts Assessment through the Purdue Climate Change Research Center. She says in the next 30 to 50 years, Indiana is projected to get about three times as many days where temperatures are 90 degrees Fahrenheit or above.

We're also expected to have more rain — 6 to 8 percent more. Widhalm says, unfortunately, that  would mostly be during the winter and spring seasons where Indiana already gets plenty of rain — sometimes leading to flooding.

Widhalm says lots of rain and hot temperatures can have all kinds of negative impacts. Runoff from excess rain can hurt aquatic life living in Indiana's waterways or cause algal blooms to form — affecting some drinking water sources. If surface water gets too warm, it can't be used to cool down power plants causing them to shut down.

Tags:climate changewaterWhite River Alliancewater infrastructure
Support independent journalism today. You rely on WFYI to stay informed, and we depend on you to make our work possible. Donate to power our nonprofit reporting today. Give now.