The Senate Utilities Commission heard five and a half hours of public testimony Thursday on a bill that would overhaul an alternative energy practice called “net metering.”

This practice allows people with solar panels to sell the excess energy they produce back to the grid at the retail rate.

But Republican Sen. Brandt Hershman’s bill would allow utility companies to reimburse owners at a wholesale rate instead, which is lower.

“We think Senate Bill 309 is a tremendous balance of several critical policy issues facing the state of Indiana,” Maassel says. “One is to increase the ability for customers to use generation that’s installed on their own property, but also, the need to make sure that they do so in a way that does not put a subsidy on their fellow customers.”

Maassel was one of four speakers who testified in support of Senate Bill 309.

But most of the lengthy testimony opposed it, including small business owners, schools and religious organizations. Critics say the measure would muscle out smaller competitors from the emerging solar market.

Scott Turney of the Indiana Small and Rural Schools Association was one of many asking for exemptions for schools.

Religious organizations also asked for an exemption. The committee might look at the bill again next week. If the bill passes this committee, it will move to the Senate for a vote.

Tags:solar power2017 legislative sessionnet metering
Support independent journalism today. You rely on WFYI to stay informed, and we depend on you to make our work possible. Donate to power our nonprofit reporting today. Give now. 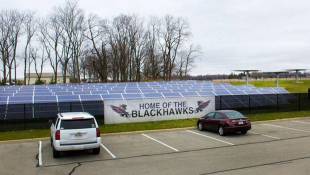 Sheridan Community Schools, a small, rural district in the heart of central Indiana, has taken a unique approach to managing energy costs.