Communities React To E-Cigarette Use Among Teens

In the past year the number of teens using e-cigarettes has increased by 78% and experts are worried. Side Effects Public Media’s Araceli Gomez-Aldana spoke with WFYI’s All Things Considered Host Matt Pelsor about the rising numbers.

Araceli Gomez-Aldana: I started reporting on this topic after reading the 2018 National Youth Tobacco Survey. It said there was a big surge in e-cigarette use among youth– 1.5 million more students are using e-cigs in 2018 compared to 2017. In Indiana vaping increased for all 7th to 12th graders last year especially in teen boys.

So after seeing these numbers our community outreach team went out to cities like Kokomo and Terre Haute to hear how residents are handling the problem.

Matt Pelsor: What are some of the things you heard?

AGA: Mostly that there’s a lack of information. Teachers and parents don’t always know what vape pens look like and of course the company JUUL always comes up.

MP: JUUL is the California company that dominates the e-cigarette market.

AGA: Exactly. They’re really popular among teens. So sometimes these vape pens or JUULS are easy to hide. They’re small and they produce little smoke.

Also users themselves don’t know how much nicotine is in these products. And the National Academy of Medicine says teens who use e-cigs are three times more likely to transition to traditional cigarettes.

MP: That’s what’s concerning, right? As we know nicotine is an addictive substance. So how prevalent is the use among teens?

AGA: They’re everywhere. Two high school student we spoke to in Terre Haute, Sasha and Kayla, they say a lot of their classmates JUUL.

“Everyone at school has one. And they’ll do it like just bend down and blow the smoke under the table. During school? Yeah. One hundred percent. In almost every class I’m in, someone’s JUUling- almost. Like the teachers know it’s happening. The teacher’s aren’t stupid. It’s not like they are just turning a blind eye. ”

I asked them about consequences at school if you are caught with a JUUL or a vape pen. They say students do get in trouble. They get it taken away and a parent is notified but they don’t know of any resources to help them if the student is dependent on these nicotine filled devices.

Right now, schools have rules in place that prohibit any tobacco products but as a health reporter I started asking if there are resources for students - especially if they develop a dependency. At the listening session in Terre Haute a school representative that focuses on improving mental health resource in her school district , said trying to punish everyone is overwhelming and they want to work on prevention instead.

“Because we are seeing so many of these infraction come through the administration  building through expulsion hearings and things, we need to create some kind of prevention and education program that with those offenses comes participation.”

MP: So what about the health risks? We know traditional cigarettes are harmful, what do we know about electronic cigarettes?

AGA: Well, we don’t know much about the long term effects of e-cigs and vaping use. And there’s debate about whether or not they’re safer than traditional cigarettes. BUT when we are talking about teens, some as young as 12 and 13, of course this is a concern. A JUUL pod contains as much nicotine as a pack of traditional cigarettes. So experts can agree on one thing, nicotine and the developing brain is not a good thing.

A pediatrician at the Kokomo listening session, Dr. Dana Stewart,  says there can be long term effects.

“Nicotine itself affects the prefrontal cortex. And so that is responsible for our executive decision making skills. And also our ability to pay attention to focus so there’s definitely been studies that’ve show that that is affected by nicotine.”

MP: Did you hear from parents? What’s their take on all of this?

AGA: Parents did attend the sessions. I think they feel like there’s a lack of resources and information. For instance, what do you do if your middle schooler or high schooler is trying these vape pens - e-cigs - and then becomes dependent? That’s a concern.

Anyone who wants to learn more about e-cigarettes can find our stories at sideeffectspublicmedia.org. And the FDA website has lots of information, including its anti-smoking campaign called The Real Cost.

Side Effects Public Media is following this topic and is holding a live streamed panel conversation on June 4, 2019 at 11 a.m.  For more information go to sideeffectspublicmedia.org/events.

Tags:E-cigarettesvapingnicotineaddiction
Support independent journalism today. You rely on WFYI to stay informed, and we depend on you to make our work possible. Donate to power our nonprofit reporting today. Give now.

The Marion County Public Health Department recommended Tuesday that all residents of the county including Indianapolis wear masks in indoor public spaces, regardless of vaccination status.
Read More 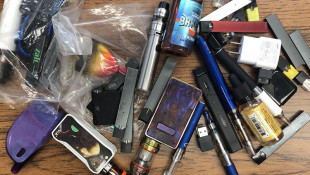 Nationwide, e-cigarette use rose 78% among high school students last year, the FDA says. The agency taken steps to address what it calls an epidemic. For example, it has warned manufacturers to stop marketing to kids by using fruity flavors and colorful packages. 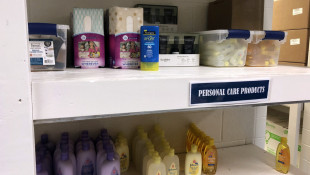