Not everyone in Central Indiana has access to a good job with family-sustaining wages. For many in Marion County the problem is transportation: an estimated 30,000 households do not have vehicles.

That’s almost three times as many homes without vehicles than all of the bordering counties combined.

Some of those residents may love taking the bus to work. Jimmy Smith doesn't like it at all.

“It does get frustrating, having to rely on city transportation,” Smith said. “When you can’t afford to have a car, gas to get there, insurance and stuff like that.” 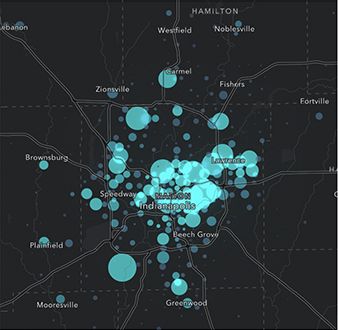 His morning route started at 5 a.m., near his house. He transferred to a different bus downtown. That took him to his job on the southside of Indianapolis, still in Marion County.

When asked to describe this experience in a sentence: “A pain in the butt.” But that was his only way to get to work, at a job that didn’t also provide health care.

While Indianapolis public transportation is expanding, there are still many gaps, and it stops at the Marion County line. It does not extend throughout bordering counties – and that is where Central Indiana has its fastest growing number of “good jobs.” 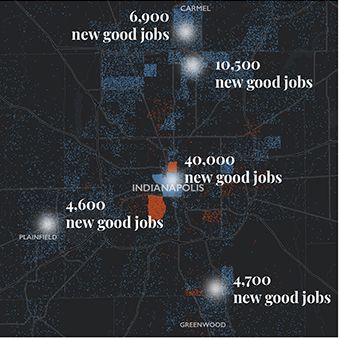 A good job provides health care. It has opportunities to learn new skills and grow in your career. It is more than a living hourly wage – in Indiana, it pays more than an estimated $40,000 a year.

Sarah Kalloch, executive director of the Good Jobs Institute, said without a good job, it is rare to be able to break the cycle of poverty.

“I think when people live in poverty, we often blame the person and not the system,” Kalloch said.

People without good jobs often have to work multiple jobs, which is difficult to manage. And many studies show that financial instability contributes to mental and physical health problems.

“You're thinking about all the bills you can't pay and how you're going to make sure everyone has enough to eat and make sure you're not evicted. And that has a significant impact on your ability to focus,” Kalloch said.

This is a growing problem in Indiana, where only around 40 percent of workers are in good jobs. That not only indicates they are in or near the cycle of poverty, it is also bad for the economy. And studies show that if more people aren’t connected to good jobs, the problem is likely to get worse.

In the last decade, there has been an increase in good jobs in and around Indianapolis. Many of these jobs are in advanced sectors, like health and technology.

The fastest growing sector of new good jobs are outside Marion County, not on the IndyGo bus lines. 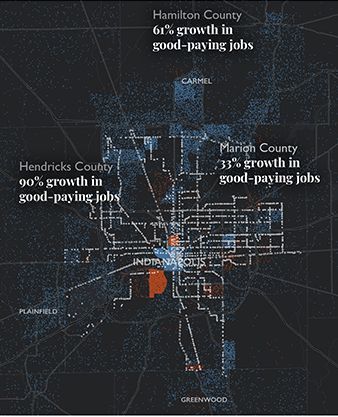 A lack of transportation to a good job is part of the cycle of poverty. If someone can’t afford a car, it’s difficult for them to get a stable job with benefits that provides the opportunity to accrue the wealth necessary to buy one. Even after that initial purchase, expenses continue with factors like gas, insurance and maintenance.

Often that problem is compounded by education barriers. Of the number of new good jobs in and around Indianapolis, almost 75 percent of jobs in industries that pay well and provide benefits – and don't require a college degree – are in Indianapolis’ suburban counties.

That makes them inaccessible to Marion County residents who don't have their own transportation.

Public transit outside of Marion County is sparse, and inside Marion County there are still obstacles for people who need to commute to work: bus lines don’t go everywhere.

But there are active efforts to increase equitable access.

Officials with Indianapolis' public transportation agency, IndyGo, said recent transportation developments aim to bridge these gaps. For example, the Purple Line, a bus rapid transit route connecting Indianapolis and Lawrence, was planned to serve some of the city’s most disinvested neighborhoods on the Eastside.

IndyGo also partnered with local nonprofit Pathway Resource Center on a new micro-transit initiative called Driven to Success. For $2, residents of the city’s far eastside can schedule a 15-seat bus to pick them up at their door and take them anywhere within a 10-mile radius.

City-County Councilor La Keisha Jackson (D-14) is a leader for the Driven to Success project. She says many residents need these initiatives to access quality employment and other essential resources.

“Where they're lacking food access they can go to grocery stores or food pantries,” Jackson said. “They can go to their jobs, or if they need to go to an interview, or pick up job applications. Child care, health care, pharmacies, all those needs.”

Jackson said project leaders made sure to include large employers within the boundaries, like a Pepsi warehouse, an Amazon facility and Community East Hospital. She says she hopes this project will provide assistance to communities otherwise not getting their needs met through existing public transit.

IndyGo has previously proposed further expansions into Hamilton and Johnson counties, but they were denied. Black says right now, there are no plans to expand into bordering counties.

Tags:good jobspublic transportationautotransportationMarion CountyIndianapolis
Support independent journalism today. You rely on WFYI to stay informed, and we depend on you to make our work possible. Donate to power our nonprofit reporting today. Give now.