Listen to the radio version of this story

The Cook Group Inc. plant in Ellettsville is putting a chemical into the air that the Environmental Protection Agency now knows can increase your risk for cancer long-term.

Ethylene oxide is used to sterilize medical equipment, spices, and other things — and is responsible for higher lifetime cancer risks near industrial facilities around the country. But many residents living near these plants weren’t told about the risks — including people in Ellettsville.

David Kirk grew up in Ellettsville and moved into his childhood home with his wife and 6-year-old daughter four years ago. He said it’s a quiet neighborhood and more affordable than nearby Bloomington. But what Kirk really loves is the big woodlot in the back where he and his daughter like to look for animal tracks and fossils.

“Whatever this type of fossil is, we’ve got all sorts of them back here and I’ve always been able to find them since I was a kid and still to this day. My daughter finds them by the plastic cup-full," he said.

Just through those woods is the Cook facility — about 200 yards from Kirk’s house. As you get closer, you can hear the low whirr of the plant competing with cicadas in the trees.

Cook uses a chemical called ethylene oxide to sterilize its products. In 2016, the EPA found it was far more toxic than the agency originally thought — 30 times more toxic to adults and 60 times more toxic to kids. Long-term exposure to it can cause blood cancers and breast cancer in women, among other things.

But even after living here for four years, no one told Kirk that Cook was putting this into the air.

According to the latest EPA National Air Toxics Assessment, the likelihood of getting cancer in Ellettsville over the course of a lifetime — from air pollution alone — was about 50 in 1 million in 2014. That's higher than the national average and was higher than any other area of the state that year except perhaps Cleveland Cliffs steel mill in Portage — formerly known as ArcelorMittal.

EPA work files show those levels were doubled for people like Kirk, who live closest to the plant — reaching risk levels the agency calls “unacceptable.”

Whose job was it to notify residents? That's unclear

But why weren’t Ellettsville residents told? And whose job was it to tell them? That’s not clear.

Ted Palma recently retired from the EPA after working in its Office of Air Quality for more than 20 years. He was one of the principal investigators on the National Air Toxics Assessment.

In 2018, the year that the EPA updated its lifetime cancer risk map which reflected just how toxic ethylene oxide is — it lit up with hundreds of blue hotspots that weren’t there before. Palma said unlike large chemical plants, a lot of these small industrial sterilizers are located in local communities.

“Strip malls and small industrial parks and things like that — where you have people living very close. There’s two sides to exposure: having the pollutant and the emissions and then the actual exposure itself — how close are people living," he said.

Palma said the agency worked to release the cancer risk data as quickly as it could.

“Each of the states, and regional and local partners, and where people in local communities contacted us — we did everything in our power to reach out to them and tell them exactly what was going on,” he said.

Palma said the EPA doesn’t have the staff to check the data at every ethylene oxide facility in the country — it’s up to the states to do that and work with facilities to address those emissions. But while the Indiana Department of Environmental Management reached out to Cook about its emissions — it didn’t contact residents. IDEM declined an on-camera interview and would not make experts available aside from communications staff.

But Michelle Mabson feels the EPA should take some responsibility for not informing residents — even if it wasn’t obligated to do it. She’s a staff scientist with the environmental group Earthjustice and previously worked as a fellow in the EPA’s Office of Children’s Health Protection.

“This wasn't a routine business-as-usual piece of information to be sharing, especially because of the changes to the toxicity information," she said.

The EPA’s own watchdog group has also criticized the agency. Last year, the Office of Inspector General issued a report that said the EPA failed to notify residents about cancer risks near the 16 highest ethylene oxide emitting plants — much less lower-emitting facilities like Cook.

Many of the plants that use ethylene oxide are also located in Black, Brown, Indigenous, and lower-income communities. Mabson said the EPA should have coordinated better with state agencies to make sure residents knew and understood their health risks.

“That initial, proactive approach should not be coming from an already burdened community,” she said.

William Ellis is a town council member in Ellettsville. He said it's frustrating that he only heard about the situation with ethylene oxide now.

"No disrespect to reporters, but this should come from a government agency that this is going on instead of media," he said.

How much did the Cook plant emit? We have to take Cook's word for it

Ellettsville residents are likely breathing cleaner air than what they were seven years ago. Cook has made several voluntary upgrades since 2019 to drastically lower its emissions. It added another 30 dry bed reactors to reduce emissions. It also created something akin to a vacuum-sealed box — it pulls the air out of all of the rooms that could contain ethylene oxide and send it to treatment.

But just how little — and how much it emitted in the past — is less certain. Most industrial plants report their pollution themselves. There aren’t many state and federal regulators to make sure those numbers are right. Sometimes the EPA even allows companies to change their numbers after the fact.

When the National Air Toxics Assessment was released showing the higher cancer risk in Ellettsville, Cook sent a letter to the EPA. It said the plant over-reported its emissions for 2014 and 2017 — and that those numbers should be about half what it originally said.

In July 2021 — about a month after we visited the plant — Cook asked the EPA to change its emissions numbers again. This time for every year from 2014 to 2017. The EPA accepted those revisions for all but one year: 2015, when Cook accidentally released about 360 pounds of extra ethylene oxide into the air.

When asked how the EPA Region 5 goes about checking the accuracy of those revisions, the agency sent the following response:

"A facility’s senior management official must review all revisions and withdrawals and certify that the reported information is accurate. EPA typically accepts all revisions and withdrawals it receives because the facility’s senior management official has attested to the accuracy of the information submitted. EPA’s Toxic Release Inventory Compliance and Enforcement Program may conduct inspections or off-site record reviews to verify reported release estimates. If found in noncompliance, a facility may be subject to penalties.”

All of this makes it hard to tell exactly how much of a risk the plant poses to people living nearby, like David Kirk. Earthjustice's Mabson said that's why it's important for environmental regulators to find out if those estimates are indeed accurate.

Kirk said it’s too late to change what he might have been exposed to. He’s more concerned about what the chemical could be doing to his daughter.

“My mother passed away from cancer in 2008. So was it a contributing factor? I don't know. Maybe, maybe not. You know, but I don't want it to be a factor anymore," Kirk said.

How the federal government is addressing ethylene oxide

At least for now, Cook officials said they have to use ethylene oxide — it’s the only approved chemical that can sterilize their products without damaging them. The Food and Drug Administration is looking into alternatives, but it could be years before any of them get approved.

The EPA is expected to issue new rules for commercial sterilizers like Cook that use ethylene oxide next year. Mabson said it could require companies to do a number of things — like install certain kinds of emission reduction technology or air monitors for ethylene oxide. She hopes it will also include a new health risk assessment.

"It is crucial to do so here and it will certainly show us whether emissions need to be reduced," Mabson said.

Mabson said that now is the time for residents to get involved in this rulemaking process with the EPA because it will likely be another eight years before the agency updates them again.

How ethylene oxide could impact a growing town

Ellettsville town council member William Ellis said he feels more at ease knowing Cook’s ethylene oxide levels are lower and wants the EPA to investigate what damage could have been done to residents. He hopes, now that the emissions have gone down, that won’t dissuade people from moving here.

On the town's west side, Ellettsville has built out infrastructure in the hopes of attracting new businesses.

“When you’re talking light industrial, especially commercial, you're going to need large tracts of land. And that's what this offers here," Ellis said.

Ellis said one thing’s for sure — he’s going to ask more questions before another industrial plant moves in.

“I want to know from them: What are you emitting? And not just asking the question, 'what's cancer-causing' but 'what would be a potential carcinogen.' Because that later on it may flip to one — and also, we don't want to spew that in the air," he said.

But if one of those chemicals does become a known carcinogen, it’s not clear who would be responsible for notifying people in Ellettsville — which makes it unlikely that residents will know about it.

With the lack of communication from state and federal environmental regulators, Ellettsville residents are still left with more questions about ethylene oxide and Cook than answers.

Cook declined requests for an interview. The company did respond to written questions, provided background information, and allowed us to tour the facility.

Tags:Cook MedicalEllettsvilleIndiana Department of Environmental ManagementEnvironmental Protection Agency
Support independent journalism today. You rely on WFYI to stay informed, and we depend on you to make our work possible. Donate to power our nonprofit reporting today. Give now. 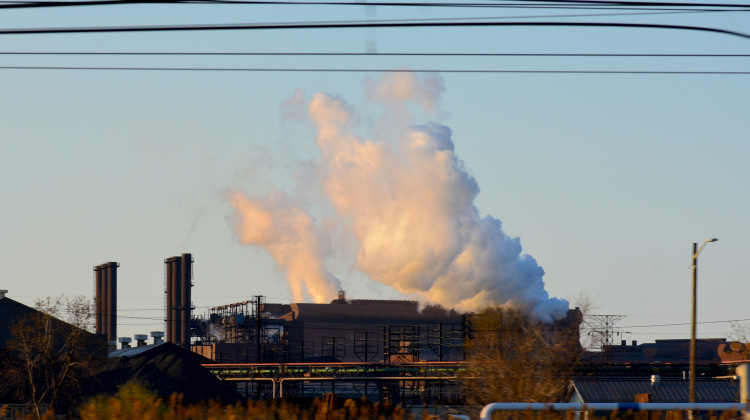 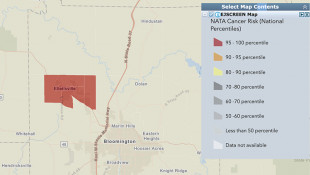 What Ellettsville residents should know

The U.S. Environmental Protection Agency said long-term exposure to ethylene oxide increases your risk for cancers of the white blood cells like non-Hodgkin lymphoma, myeloma, and lymphocytic leukemia (chronic or acute). It can also increase the risk for breast cancer in women.