INDIANAPOLIS – A group of City-County Council Democrats wants the city’s BlueIndy program to make a U-turn before it gets too far down the road.

The program would provide the city with an electric car sharing service that proponents say would provide a form of mass transit and make Indianapolis more attractive to millennials.

Councilor Joe Simpson, who represents District 9, and other critics said the mayor’s office has given the program and it’s parent company, Bolloré Group, special treatment.

“We want them – just like any other business that moves into this city – they need to follow the same rules,” Simpson said. “They’re getting special treatment which is coming off the backs of taxpayers.”

Simpson added Bolloré needs to sign a franchise agreement with the city to give the council more oversight.

Other critics focused on the funding flowing in to BlueIndy.

Councilor La Keisha Jackson, D–District 18, said some the money used to fund the program is a misuse of taxpayer dollars.

“We got BlueIndy brand new cars, but we cannot provide adequate police cars for public safety which is number one right now with the murder rate,” Jackson said.

Simpson said roughly $6 million of that money has been loaned to BlueIndy instead.

“Did anybody sign a loan? No,” Simpson said. “The point of this is that we want the taxpayers to know what we asked them to do and what the administration decided to do is two different things.”

BlueIndy will begin operations with its first 50 vehicles Wednesday. The service plans to eventually expand to a fleet of 500 cars and 200 charging stations throughout Indianapolis.

Simpson said the city is looking to expand the wrong programs.

Tags:Greg BallardBlueIndyJoe SimpsonLa Keisha Jackson
Support independent journalism today. You rely on WFYI to stay informed, and we depend on you to make our work possible. Donate to power our nonprofit reporting today. Give now. 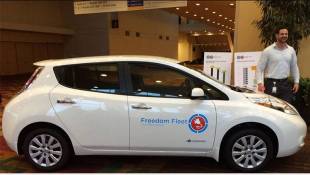 Indianapolis Mayor Greg Ballard and city-county councilors have reached a tentative deal in a lawsuit over the city's electric vehicle fleet.