As the year comes to a close, Indianapolis’ Community Justice Campus prepares to transition to a new location.

The county’s justice system starts its move in the next month from downtown to a neighborhood southeast of Indianapolis. The campus was originally set to open in December, but due to pandemic-related supply chain issues, it will begin to open early next year. City leaders hope the campus will improve criminal justice services and revitalize the Twin Aire neighborhood.

Here’s more information on the move and the campus.

What is the Community Justice Campus?

The community justice campus is a newly constructed collection of buildings to house and update the city’s adult jail and courthouses. Since the city’s early days, those services have been based downtown. The current jail and City-County Building were built in the 1960s.

The nearly $600 million campus includes a new adult detention center with space to detain nearly 3,000 people. Currently, the Marion County jail can house about 2,500 detainees between its two locations.The city says it cannot give details on when the detainees will move to the new jail, for safety reasons, but says they will all be moved into the new facility by the end of January.

In addition to the jail, the county’s court system will move to the campus in Febraury. Other buildings including the Coroner’s Office, Forensic Services Laboratory and Youth and Family Service Center will open at various times in 2022.

The jail and courthouses were originally set to open this December, but supply chain shortages caused by the COVID-19 pandemic have affected some systems and equipment, such as cameras, outdoor lights and other items with computer chips.

An Indianapolis spokesman said more tests and training need to be done on the systems before the campus opens.

Those employees and services will join the campus Assessment and Intervention Center. That first part of the campus opened one year ago. The AIC is a clinic for people with mental health or substance abuse problems, including those who may have encountered law enforcement.  It was created to divert more people with those health problems away from the criminal justice system.

The AIC is preparing ahead of the move of other services, anticipating an increase in people seeking services.

Learn more about the AIC, its purpose in the campus and the community and its next steps in this audio story

The AIC is open to anyone, not just those who encounter law enforcement, and provides its services for free.

How did the new campus come about?

The city created the campus to update long-needed improvements to justice buildings while also providing more resources to those who encounter the criminal justice system.

Though the plan for the updates started decades ago, the site for the campus was selected in 2017, and construction broke ground in 2018. The city previously tried to create the campus at a different site in 2015, but the plans fell through.

The new campus also sits on an abandoned industrial site. Riordan said the city hopes that the campus will revitalize the Twin Aire neighborhood, and bring more restaurants and retail spaces to the area.

“We're not just going to do the best and nicest development downtown, we're going to spread it around to the neighborhoods so that we can benefit as many people as possible,” Riordan said. “It is going to inject much needed life into long underserved neighborhoods.”

The city sold bonds, instead of using taxes, to fund the nearly $600 million campus.

Col. James Martin with the Marion County Sheriff’s office says the current jail has been in dire need of improvement for years. Martin said the main jail, located on Alabama Street downtown is falling apart. Keeping up with repairs is also very costly, he said.

Martin said the jail is past the point of repair, and a new jail was the best solution. The current jail, “Jail 1,” does not have enough beds, so the county houses some detainees in a second facility, “Jail 2.”

Additionally, the current layout downtown makes it difficult to transport detainees from the jail to their court appearances. Sarah Riordan, executive director of the Indianapolis Local Public Improvement Bond Bank, said detainees are required to take complicated routes to get from one building to another.

“It's just inefficient, too expensive, and frankly, not particularly the safest of processes,” Riordan said.

More new safety measures will be implemented in the new campus as well. One of these is better surveillance. It’s hard for guards to see all the detainees and the new facility will have better cameras and technology.

And the current jail is not staffed like a medical facility, so it sends detainees to a local hospital to receive treatment.

“If you can introduce the inmates in an environment that's less stressful, then hopefully the impact of that is you have a less stressed staff, and it's easier to manage the inmate population which makes their job easier,” he said. 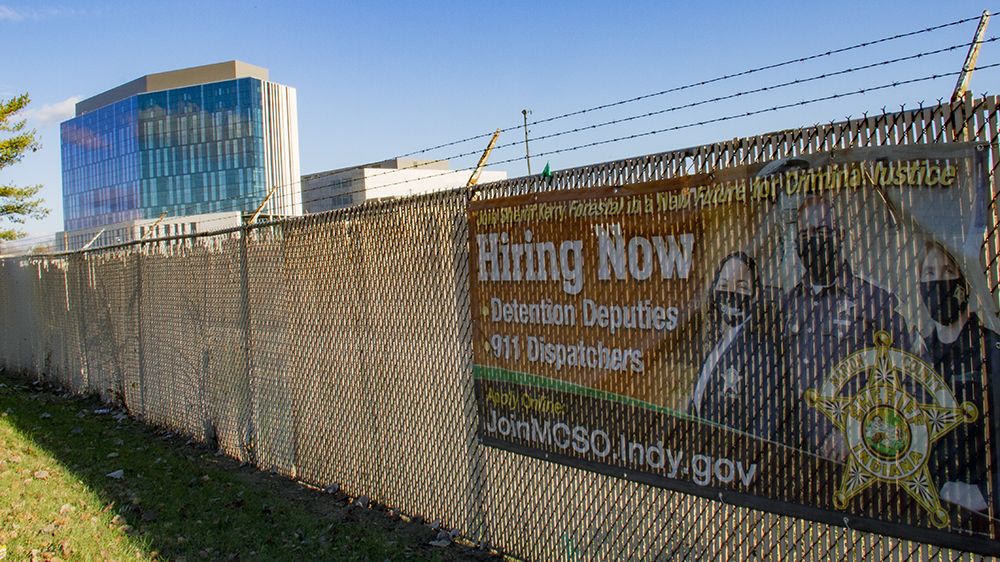 Lauren Rodriguez, director of the city’s Office of Public Health and Safety says Indianapolis Mayor Joe Hogsett wanted to look at the root causes of criminal behavior, including mental health and substance abuse.

This led to the creation of the Assessment and Intervention Center. The clinic was created to be a space where police could take people experiencing a mental health or substance abuse challenge to receive treatment and be connected to resources.

Some clients can also stay at the AIC for several days, for example, if they are experiencing drug withdrawal or homelessness in addition to mental health or substance abuse issues. The AIC was heavily influenced by the Rueben Engagement Center.

“Mental health or substance abuse has been something that as a nation we have not always addressed and put to the forefront of people's minds,” Rodriguez said. “And so this allows us to normalize these things and acknowledge that anybody can be impacted by them, and that we are here to help. And we care.”

The AIC has been open for a year, but only at half capacity. For the AIC to expand to full capacity, which is 60 beds, it must secure more funding from the City-County Council.

Jennifer Cianelli, the clinic’s site manager, said she expects more people to seek the clinic’s services once the rest of the campus opens. In preparation, there are about 15 open positions for new staff.

“It is no shock that it is difficult to find clinicians with the national work shortage. And we're looking for fully licensed clinicians, just because of their ability to assess and have that clinical judgment with regards to risk factors. So that's really important,” Cianelli said.

When the AIC first opened last December,about 12 people were staying at the AIC a day. Now, that number has increased to 20.

What will happen to downtown?

City Controller Ken Clark says downtown will look significantly different once the justice system moves out of downtown and its many workers move with it. Only about half of those working in the City-County Building will remain downtown once the campus is fully operational.

“Downtown is still the city's largest neighborhood in terms of how many people are living here and working here. And so we want to continue to grow that,” he said.

Clark says the crime lab, which processes evidence, will remain in the basement of the downtown jail for now but will eventually move to the campus. Once it does, Clark says the jail will likely be demolished. It’s unclear what will be built on the property, but Clark says there is a need for more housing in the downtown area, which became clear during the pandemic.

“We take it seriously that all of these locations really have an opportunity to continue to propel the city through this post pandemic recovery. And so we want to take advantage of that,” Clark said.

Clark says there is currently a request for proposals to decide the City-County Building’s fate. It’s likely  the remaining workers will either stay in the building and the other half of the building will be leased out, or they will move to a different building downtown.

If that later happens, the City-County building could be completely leased to other businesses, or it could be an opportunity for more housing. Clark says it’s not clear what will happen, but the city has planned community engagement sessions to determine what should take place.

Tags:community justice campuscrimecriminal justice reform
Support independent journalism today. You rely on WFYI to stay informed, and we depend on you to make our work possible. Donate to power our nonprofit reporting today. Give now.