Cruz Turns His Attention To Indiana

INDIANAPOLIS -- Presidential hopeful Ted Cruz says Indiana has a “national megaphone” in the race for the Republican nomination.

The Texas senator has turned his focus to the Hoosier State as he and fellow candidate John Kasich coordinate to stop Donald Trump from securing the nomination.

The Cruz and Kasich campaigns each sent out statements late Sunday, announcing that Kasich was pulling his resources out of Indiana to focus on the New Mexico and Oregon primaries, while Cruz is doing the reverse.  Each campaign asked its allies to focus their resources the same way.

Cruz traveled the state over the weekend, delivering a message: that the eyes of the nation are on Indiana, giving Hoosiers a chance to decide the future of the presidential race.

“Do we want a candidate whose only approach to the problems in America is to yell and scream and curse and insult anyone standing near him? Or do we want to get behind a campaign with a positive, optimistic, forward-looking conservative vision to solve the problems in this country,” asked a crowd of supporters.

His pitch to Hoosiers includes a pledge to institute a flat tax and abolish the IRS, kill jihadists across the world, and defend religious liberty. Cruz says he and Donald Trump are “neck-and-neck” in Indiana, though recent polls suggest Trump has the lead.

Kasich was scheduled to come to Indiana Tuesday for a pair of events in the Indianapolis area, but they have been canceled.

Tags:Election 2016Ted CruzDonald TrumpJohn Kasich
Support independent journalism today. You rely on WFYI to stay informed, and we depend on you to make our work possible. Donate to power our nonprofit reporting today. Give now. 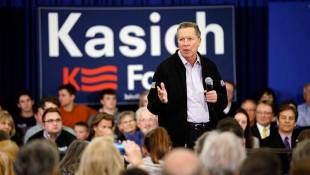 In an effort to stop Donald Trump from winning the Republican nomination for president, Texas Sen. Ted Cruz and Ohio Gov. John Kasich suddenly are working together.