INDIANAPOLIS — In an effort to stop Donald Trump from winning the Republican nomination for president, Texas Sen. Ted Cruz and Ohio Gov. John Kasich suddenly are working together.

Their new, shared goal is to prevent Trump from securing the 1,237 delegates required to win on the first ballot at the Republican National Convention.

“Due to the fact that the Indiana primary is winner-take-all statewide and by congressional district, keeping Trump from winning a plurality in Indiana is critical to keeping him under 1,237 bound delegates before Cleveland,” Kasich’s chief strategist John Weaver said in a statement. “We are very comfortable with our delegate position in Indiana already, and given the current dynamics of the primary there, we will shift our campaign’s resources West and give the Cruz campaign a clear path in Indiana.”

If none of the three candidates have those 1,237 delegates on the first ballot in Cleveland, it could lead to a contest convention. Jeff Roe, Cruz’s campaign manager, said suspending some campaigns is the best way to make sure Trump doesn’t secure the ballot.

“Having Donald Trump at the top of the ticket in November would be a sure disaster for Republicans,” Roe said in a statement. “Not only would Trump get blown out by Clinton or Sanders, but having him as our nominee would set the party back a generation.”

Trump has repeatedly complained about the delegate system. Sunday night he called the new strategy of teaming up “totally desperate.”

“Wow, just announced that Lyin’ Ted and Kasich are going to collude in order to keep me from getting the Republican nomination. DESPERATION!” Trump tweeted.

Now Kasich and Cruz have to hope voters in Indiana, New Mexico and Oregon will follow their lead.

Kasich had events planned in Indiana Tuesday, which have been removed from his campaign website.

Both Kasich and Cruz plan to compete in the remaining primary states.

Tags:Election 2016Ted CruzDonald TrumpJohn KasichIndiana politics
Support independent journalism today. You rely on WFYI to stay informed, and we depend on you to make our work possible. Donate to power our nonprofit reporting today. Give now. 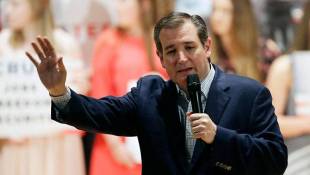 Cruz Turns His Attention To Indiana

Republican presidential candidate Ted Cruz has turned his focus to the Hoosier State as he and fellow candidate John Kasich coordinate to stop Donald Trump from securing the nomination.