Indiana consistently ranks among the worst states when it comes to its infant mortality rate. One of the ways the State Department of Health says parents can reduce that risk is by using safe sleep practices.

But, recent changes to the state's safe sleep guidelines for licensed childcare providers are causing confusion for some parents.

Amanda Morris is adjusting to life with a newborn again. Her daughter is 5 years old, and she just recently had her son Arthur.

She says, at times, it can feel like she's parenting a newborn for the first time. Arthur is much different than her daughter was as a baby, but there's one tool that's been helpful for both kids.

"It's 3 a.m. and he's screaming and he's just not feeling the security that he had," Morris says. "And, so, we swaddle."

Swaddling is a special method of wrapping a baby in a blanket. The American Academy of Pediatrics says it can soothe infants because it mimics the feeling of the womb.

Until recently, it was common in childcare settings across the state.

"It's helpful because it can be a little crazy at times in rooms," says Robyn Fletcher, director at Kid Angles daycare in Bloomington. "And, swaddling helps them feel secure and safe."

The state changed its safe sleep rules for licensed childcare providers effective July 1, and the guidelines say infants can no longer be swaddled in those settings. Fletcher says it was a big adjustment for her staff.

"So we had three [babies] start right before the licensing rule changed," Fletcher says. "So, they were already starting to be swaddled here. And, then when that rule came out and it changed, our staff looked at me in fear."

Fletcher says they talked to parents about the transition, and it took about one month to retrain the babies to sleep easily without their tightly-wrapped blankets. She says the change was confusing for some parents – some wondered if it was safe to still swaddle their infant at home.

"Because the swaddling that new moms use to help their child, and then they go looking for childcare when they have to go back to work, and then we're told that 'Oh, we can't swaddle your infant.' It's scary for them." 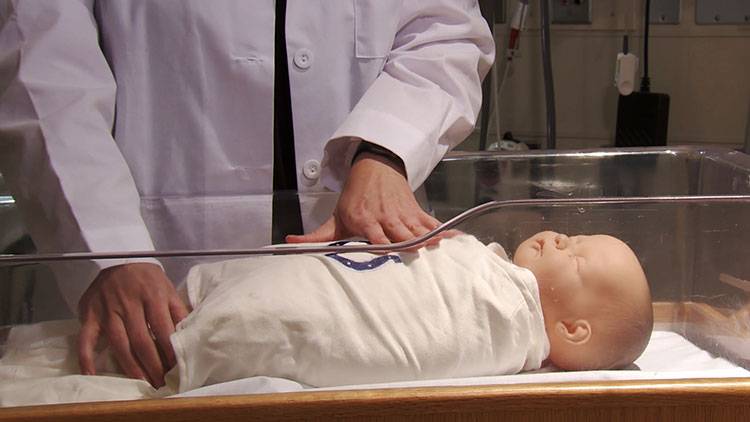 
When Is Swaddling Safe?

"So when babies reach about two months of age, they're at the age where they might start rolling over," Dr. Scott says. "So, they may roll from their back onto their tummies. And, when babies are rolling, we want to make sure their arms are free. Because if they get over to their tummies, we want to make sure they are able to push their body back up if they start to get in trouble where their face is starting to get planted into a softer surface."

The AAP also recommends parents stop swaddling by about two months, before a baby starts to roll.

If babies are still swaddled when they're able to roll over, the risk of Sudden Infant Death Syndrome increases. That's why national guidelines from Caring For Our Children say swaddling in childcare settings is not necessary or recommended. Most infants are at least six weeks old by the time they enter childcare. The more active they become, the higher the risk of serious health outcomes if they remain swaddled.

Morris says while she was initially worried about the new childcare rules and how Arthur would adjust without being swaddled, she understands it's what's safest for her baby. So, she's doing what she can to prepare for the transition.

"We are working on more of a loose swaddle," Morris says. "I want him to feel secure, but it's going to contradict what they can do at schools."

The State Department of Health says there were 100 sleep-related deaths in Indiana in 2017. The agency says parents should always practice the "ABCs" of safe sleep, which means a baby should sleep alone, on its back, and in its own crib or bassinet.

Tags:swaddlinginfant mortalitysudden infant death syndrome
Support independent journalism today. You rely on WFYI to stay informed, and we depend on you to make our work possible. Donate to power our nonprofit reporting today. Give now.