By Jill Sheridan and Brandon Smith

Indiana Department of Child Services Director Mary Beth Bonaventura says the well-being of Hoosier children has been put at risk because of steps taken by Gov. Eric Holcomb’s administration.

It says DCS leadership changes have undermined her work. She also cited cutbacks to provider contracts and aging technology. Bonaventura is credited by many for a quick response to the growing number of children entering the foster care system. That number has swelled with the opioid epidemic.

Holcomb thanked Bonaventura for her work and says Indiana’s children will continue to be in good hands.

“We’re head down and focused on kids and there will be more to come soon,” Holcomb says.

Holcomb says his administration helped increase nearly half a billion in funds for DCS this year.

“This merits action way before we can get back into the legislative session,” he says.

Brent Kent, CEO of Indiana Connected by 25 -- a nonprofit that works with foster youth -- says the leadership change could be an opportunity.

“To reevaluate what we’re doing and how we can make changes to benefit foster youth,” Kent says.

Holcomb says the search for a new director is underway.

Indiana fiscal leaders say it’s too soon to say whether there will be money available to supplement the Department of Child Services’ budget in the upcoming legislative session.

“We’ll just have to look at is that the appropriate level,” Brown says. “Hopefully done in a budget situation – I don’t know, as I said earlier it may be too early to tell what the 2018 session will bring.”

But the legislature won’t write a new two-year state budget until the 2019 session.

If DCS does ask for more money in 2018, a new revenue forecast unveiled Monday predicts the state will have nearly $400 million less than previously expected over the next year and a half.

Sen. Karen Tallian (D-Portage) notes that’s as an ongoing cut to the state’s corporate tax rate is expected to cost the state $24 million next year.

“I think we should ask Mary Beth Bonaventura what we can spend $24 million on this year. Just saying,” Tallian says.

The 2018 legislative session gets underway in January.

Tags:Eric HolcombIndiana Department of Child ServicesMary Beth BonaventuraDCS
Support independent journalism today. You rely on WFYI to stay informed, and we depend on you to make our work possible. Donate to power our nonprofit reporting today. Give now. 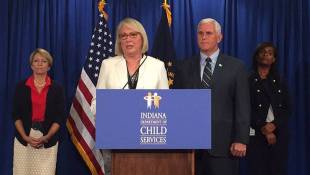 Mary Beth Bonaventura says she fears "lives will be lost and families ruined" if changes aren't made. Gov. Eric Holcomb says funding for the DCS has actually increased over the recent years.