INDIANAPOLIS -- Firearms stolen from gun owners in Marion County will now have to be reported to police or the owner will face a fine, but its likelihood of becoming law is slim.

Indianapolis lawmakers narrowly passed a stolen or lost gun reporting ordinance Monday night, despite concerns of its legal ability to do so under state laws. Several other cities and states have a law like this, but Indiana has a law that bars local municipalities from regulating gun possession.

Supporters, mainly Democrats, said it will help curb an outbreak of gun violence in the city.

"We need some kind of ordinance in which we can help people to report these stolen guns," Democratic councilor Joe Simpson said. "These guns is a real issue."

But Republicans said it only punishes lawful gun owners and would not help police crack down on illegal guns.

"If somebody would lose their gun, I guess we’re going to criminalize the victim for losing or having their gun stolen," said councilor Aaron Freeman, a Republican. "It doesn’t make any sense."

The vote broke down along party lines, but Democrats hold a narrow majority on the council. If a gun owner does not report a lost or stolen firearm within 48 hours, they’ll face a $50 fine.

Republican Mayor Greg Ballard, who will have the final say on the ordinance's passage into law, has signaled he may veto it. A spokeswoman said the mayor has "significant concerns about the legality and the timing of the proposal."

Modeled off of similar programs around the country, developers that receive public funding would of had to set aside one percent to fund public art. But outgoing Mayor Ballard said he had concerns and blocked it from becoming law.

"Conceptually, I am in agreement with the intent," Ballard said in his letter to the council, but "this proposal has many loopholes that could interfere with how resources would be distributed, creating the potential for inequity."

An attempt by the city-county council to override the veto failed Monday night. It needed 20 votes but got just 16. The measure will likely be reintroduced next year under a new mayoral administration.

Councilors will earn nearly 50 percent more per year than they do now beginning with the new session in January.

Councilors voted Monday to give themselves a $5,000 raise. It’s the first pay increase in more than a decade and is on top of per diems they receive for attending meetings, which were not increased. It also puts their new part-time salary of $16,400 more in line with what councilors in other cities make.

While some councilors, including Christine Scales, said it was "self-indulgent" and another questioned giving themselves raises while other city employees saw no pay increases, supporters said the increased compensation is long overdue.

"This is not a self-indulgent act," said Democrat Zach Adamson, eluding to Scales' comment. "This is the only mechanism in place to take care of this matter and it has to be done. And the fact that it hasn’t happened since 2001 is evidence that it’s not something that happens regularly or is common."

Some councilors also questioned the timing of vote, with it coming after an election and next year's budget was set. The council will need to find the money for the raises within its own budget line, most of which will come from salaries recouped through the elimination of four at-large council seats going into next year.

The proposal originally also includes a pay increase for the mayor, but that was scrapped by sponsor Mary Moriarty Adams after opposition from both the current mayor and the mayor-elect. 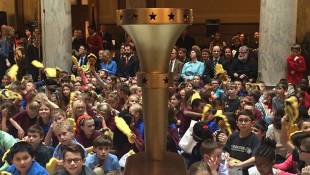 Indiana Kicks Off Its Bicentennial Celebration

The torch, which is a little less than two feet tall and weighs less than five pounds, was designed by team of Purdue University professors, engineers and students over the course of a year. It will be used for a relay next year that will travel more than 2,300 miles to all 92 counties.