The rush to get in the Congressional race came in wake of Brooks’ surprise announcement last year she would not seek reelection, after a fourth term. She is one of just a few Republican women in the House.

The pandemic was top of mind and all four candidates agreed that the current administration's response has been lacking.

Here are a few of the issues discussed:

Christina Hale, a nonprofit executive and former state representative says she’s talked to many people who are concerned about the country’s lack of preparation.

Businesswoman Dee Thornton says the pandemic is the crisis of our lifetime, and bi-partisan solutions are a must.

"We must have leaders, leaders who are willing together to solve big problems," says Thornton. "We can move our country past the politics of division and fear and prepare our country for the future."

Jennifer Christie, is a scientist who says she is the only candidate who has a laid out a climate change plan. She says it’s time for change in Washington. "This is our moment to take real action if we have the courage to do so," says Christie.

Andy Jacobs, a lawyer and son of a former U.S. Representative, also leaned in on climate change. He says public transportation is a key solution.

"We need to get away from being a society that uses cars to commute," he says. "We need remote working to become the new standard."

Jacobs believes in a single payer health care system. Thorton says the current system is broken. “We spend more than any other high income country in the world and we have the lowest life expectancy,” she says.

Fourteen Republicans met for a virtual town hall Monday night. Indiana’s primary elections will be held June 2.  To vote absentee, Hoosier must have their applications in by May 21.

Tags:5th District2020 primaryIndiana Democratic Party
Support independent journalism today. You rely on WFYI to stay informed, and we depend on you to make our work possible. Donate to power our nonprofit reporting today. Give now. 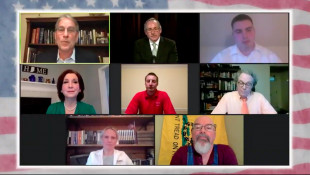 Fourteen Indiana 5th District Republican candidates made their pitch Monday during a virtual town hall as to why voters should support them, in the sprawling primary field, to replace outgoing Congresswoman Susan Brooks