'Die In' Protest Held In Indianapolis Ahead Of Senate Vote

More than 50 people gathered outside Republican U.S. Sen. Todd Young’s Indianapolis office today for what’s known as a “die in.”  The protest centered on the Republican health care bill.

The group held painted grave markers and laid down on the sidewalk outside Young’s downtown office building.

Catherine Osborne drove from South Bend to be at the event. She’s worried about the future of Medicaid.

“It covers half of all births in this country. It covers the severely disabled, the elderly, indigent and children. These are people that need medical care and I can’t understand why a pro-life Republican would be voting to take it away from them,” says Osborne.

In a statement Young’s spokesman says he continues to consider the input of all Hoosiers. Staffers were out talking with protesters, including Alexandra Penn, who says she’d like to see more cooperation.

She’d like to see the Affordable Care Act repaired not repealed.

“I think we all know there are problems with the ACA, and we’d like to see those addressed,” says Penn.

A vote on the bill has been delayed until after the July 4 holiday. 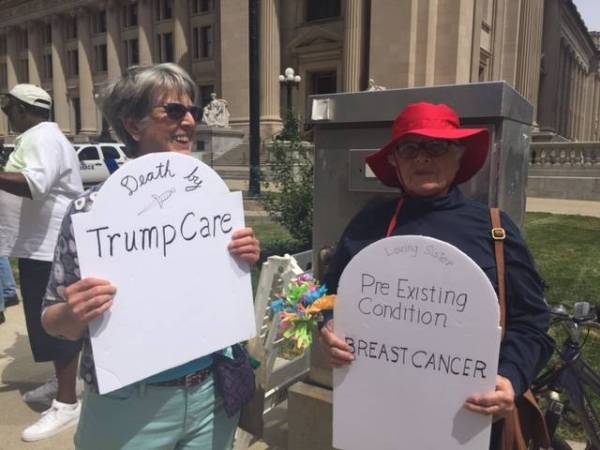 Tags:Todd YoungU.S. SenateAffordable Care Actrepeal and replace
Support independent journalism today. You rely on WFYI to stay informed, and we depend on you to make our work possible. Donate to power our nonprofit reporting today. Give now.

House members advanced the near-total abortion ban 62-38 with limited exceptions, including in cases of rape and incest, and to protect the life and physical health of the mother.
Read More