U.S. Sen. Joe Donnelly (D-Indiana) was one of a bipartisan group of senators that brokered the deal to re-open the government after a three-day shutdown.

Non-essential operations were suspended Saturday when Congress failed to pass a budget to keep the federal government moving. The deadlock ended Monday after the Senate passed a short-term spending bill after Republicans promised a future vote on immigration policies.

He says this moderate group is evidence partisan, diametrically opposed politics aren’t the only option.

“What it is is a hunger to move our country forward, to do things that focus only on what’s best for American – for Indiana – rather than these partisan, political fights and the name calling and all that nonsense,” Donnelly says.

The final short-term spending bill included a two-year suspension on the medical device tax and six years of funding for the Children’s Health Insurance Plan or CHIP.

“It was almost half and half Republican and Democrat. The party labels almost never came up. It was ‘how do we keep narrowing differences?’” Donnelly says.

He says the moderate group is ready to work together again if funding talks fall through in February.

He also made a point to thank his Republican counterpart in the Senate, Sen. Todd Young, for keeping in contact Donnelly during these negotiations.

Tags:Todd YoungU.S. SenateJoe Donnelly
Support independent journalism today. You rely on WFYI to stay informed, and we depend on you to make our work possible. Donate to power our nonprofit reporting today. Give now.

The U.S. Supreme Court has declined to hear the appeal of a man sentenced to 60 years in prison for his role in a shooting that killed a northern Indiana boy who was playing outside.
Read More 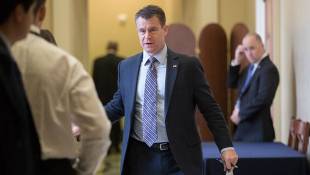