A philanthropic group warned the Indianapolis Public Schools Board Tuesday that the eastside neighborhood around Arlington High School will suffer if the board approves a plan to close the school as part of a district-wide redesign of the city’s secondary schools.

Foundation members were some of the more than 150 people who attended a forum about the proposed closure of Arlington as a high school and transition into a middle school next year.

Rick Norris, a manager of the local Walker Foundation, said he believes at risk students in the Devington Neighborhood could drop out or fall through the cracks if high schools are consolidated and they required to be bused to a school downtown.

The foundation began awarded full-ride scholarships to Arlington graduates in 2016 after the school was returned to IPS following a state intervention and as the school’s graduation rate doubled in the past few years to more than 80 percent.

“This school is uniquely positioned within the city, in the negative, to create a huge loss to the community. I think this neighborhood needs Arlington and Arlington needs this neighborhood,” said Norris, an Indianapolis attorney, after the hearing. “If the graduation rate and the percentage of kids going to college don't mean anything to this board -- nothing I say to (to them) has any relevance.”

Many expected Norris to tell the IPS board, that the Walker Foundation would fund a college prep program at the high school if it remained open. But Norris only discussed its scholarship program before his allotted three minutes ended during the public form at Arlington.

It remains to be seen if such a last-minute offer, previously reported by WFYI,  would sway a majority of the seven IPS commissioners to keep Arlington open. Member Venita Moore has already said she wants Arlington to remain open.

Next month the school board will vote on a wide ranging proposal to remake the city’s high schools, including transitioning Arlington High School into a 7-8 grade middle school and opening a “night high school” for working students. Administrative staff would also relocate to the building as Forest Manor would be closed as part of the district plan.

In some of the most impassioned comments of the evening, Tim Bass, Arlington alumni president, told the school board members that they too would be outraged if their students attended a school facing possible closure.

“In the last two years Arlington has endured more challenges than any other IPS high school in the district without much success and without much support from this administration,” he said.

More than two dozen alumni and community members spoke at the forum, most pleaded with the board to allow Arlington to remain a high school. A few voiced favor to remake the high school into a middle school. No current Arlington students or teachers spoke at the meeting.

After the meeting, IPS Superintendent Lewis Ferebee said he greatly respected Bass but felt that the district was making the right recommendation to convert the high school into a middle school.

If that happens, some Arlington students will attend three different schools in three years.

“It’s all in an effort to give them a better educational experience,” Ferebee said. “At the end of the day, that is what is really important to us.

Arlington’s operating cost is the second highest among high schools, only behind the multi-building Arsenal Tech campus.

Graduation rates have increased by more than 30 percentage points since the school was returned to IPS in 2015 after a state takeover, yet Arlington remains rated an F as of 2016.

The IPS School Board will hold a forum about Northwest High School 5:30 p.m. Thursday at the school.

The board will vote on the school closure plan Sept. 18 at the John Morton Finney Center.

Tags:Arlington Community High School
Support independent journalism today. You rely on WFYI to stay informed, and we depend on you to make our work possible. Donate to power our nonprofit reporting today. Give now.

Most Hoosiers Value Higher Education But Increasingly Worry About Costs

Most Hoosiers value education beyond high school, according to an annual survey, but almost three-quarters believe financial strains from the COVID-19 pandemic pushed higher education further out of reach.
Read More

Under Strain Of Pandemic, Some Child Care Providers May Face Permanent Closure

Nearly one in five child care providers in Indiana say they are likely to permanently close in the future, according to a survey conducted by the Office for Early Childhood and Out of School Learning at the end of last year.
Read More 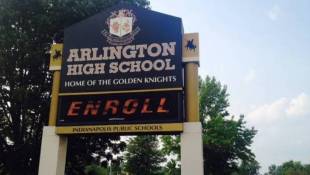 Could Arlington High School Be Saved By An Upstart Philanthropic Foundation And Dedicated Alumni?

The little-known Walker Foundation says it will fund a college prep program at Arlington High School if the IPS Board of Commissioners will let the school remain open after this academic year.