East Chicago, Indiana, officials are worried about the future of lead contamination clean up in the city because of actions taken by the Trump Administration Tuesday.

The uncertainty comes after the administration temporarily suspended grants and contracts overseen by the U.S. Environmental Protection Agency.

The Calumet neighborhood of East Chicago is contaminated with lead and arsenic at levels over 200 times the legal limit. Clean up of the neighborhood, which is overseen by the EPA, is on hold right now for the winter. And city attorney Carla Morgan says some of the clean up contracts for the spring haven’t been finalized yet.

“Anything that has not completed the procurement process, right now, my understanding is it’s in limbo,” says Morgan.

Morgan says nothing is certain at this point, and the city is still waiting on a response from the EPA.

“Our hope is that the things that we fought so hard for in 2016 don’t come to a halt,” Morgan says. “We hope that the speed of the cleanup resumes and even accelerates in 2017.”

The Trump administration has also instituted a media blackout at the EPA for the duration of their transition. Communications are being limited at the U.S. Department of Agriculture and the Interior Department, as well.

Tags:Environmental Protection AgencyEast ChicagoDonald Trump
Support independent journalism today. You rely on WFYI to stay informed, and we depend on you to make our work possible. Donate to power our nonprofit reporting today. Give now. 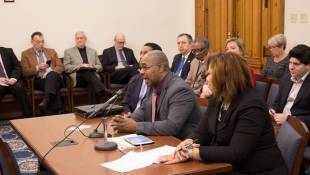 Officials from East Chicago, IN testified in favor of two proposed bills to bring more aid to the city to combat its lead crisis.