EAST CHICAGO, Ind. -- Byron Duke Florence was born in East Chicago, Indiana, and although he’s lived in other places, he’s always returned back to the town he considers home. He now owns the house where he grew up, and he lives there with his mother and other family members.

Standing on the sidewalk outside his house, he waves at every car that drives by and has a friendly conversation with the mail carrier as she walks down the block. It’s his home that he loves, but in the last few months he’s changed his mind.

“Did I prepare to get up and go? No. But I’m willing to have left yesterday,” Florence says.

That’s because the Environmental Protection Agency has deemed the soil in his neighborhood dangerous, after finding high levels of lead and arsenic.

This news frightens Florence. As a kid growing up there 50 years ago, he and his friends loved to dig tunnels under neighborhood fences near the lead plants.

"We used to see them when they dumped those 55 gallon barrels along the railroad tracks,” Florence says. “They would bulldoze them over and we would go right behind them and try and dig them up. Our exposure was direct, plain and simple. And we tracked that stuff back in the houses.”

Now, decades later, the EPA is finding the soil in the Calumet neighborhood of East Chicago has dangerous levels of lead and arsenic.

All those times playing in the dirt as a kid are weighing heavily on Florence’s mind, decades later. In the last few years he’s been diagnosed with high blood pressure, diabetes and bone cancer — and he says he’s not the only one in the neighborhood worried that this contamination has affected their health.

“Anything that bothers a person now … they think it may be related to the lead and arsenic, and they may be right,” Florence says. “I don’t know.”

What’s in the soil in Calumet?

The U.S.S. Lead facility was built in East Chicago over 100 years ago. Other smelters and refineries came and went over the years, as well. Smelting basically processes raw lead for use in products like batteries.

Through air emissions from the factories and burying waste products — which is a legally allowed disposal method — lead can get into soil, contaminating it. And this is what happened in the Calumet neighborhood of East Chicago.

“Our exposure was direct, plain and simple. And we tracked that stuff back in the houses.”

Superfund is a program run by the EPA, and is designed to help fund and clean areas contaminated by pollution or hazardous waste.

This Superfund site has been divided into three zones. Zones 1 and 3 are being cleaned up under an agreement with the Atlantic Richfield Company and DuPont, companies that the EPA and a court determined contaminated the soil. But, Zone 2, just a few blocks in between zones 1 and 3 and where Florence lives, isn’t getting cleaned up and residents aren’t receiving vouchers to move.

The misinformation of whose in danger and what to do

While it’s hard to know exactly who knew precise details about the soil’s contamination -- and when they knew it -- residents of Calumet and East Chicago are frustrated with the lack of information they are getting.

Florence remembers going into his backyard, where he kept plants and flowers, and seeing notifications from the EPA one day in 2008.

“In our backyard they came by and stuck many flags in the ground that said do not grow any vegetation,” Florence says. “No one ever explained to us why.”

And this question of ‘why?’ is being echoed all around East Chicago, including from Sen. Lonnie Randolph, D- East Chicago.

“I’m pissed off,” Randolph says. “I’m too mad to be scared. I imagine that’s how a lot of people, especially [how] the people of West Calumet feel.”

“Somebody dropped the ball somewhere,” Randolph says. “But you want to find out who it is because they should be held accountable for it.”

Part of the confusion around the problem has to do with a specific area of homes, the West Calumet housing complex. The soil under this apartment complex is considered the most contaminated, and while the EPA didn’t recommend doing so, the city of East Chicago ordered the complex be demolished. The demolition of the complex displaces 340 households, including more than 600 children.

Randolph says a huge problem with demolishing the complex is that there isn’t an abundance of available housing in East Chicago to meet the demands of all these families moving at once.

“I’m angry. Any average, normal person would be angry over a situation like that,” Randolph says.

And while the logistics of the situation frustrate Randolph, he's more troubled by residents' fear and anger about the unknown health dangers they've been living with -- possibly for generations.

“You have a lot of families that are there who are saying ‘Hey, I have three kids and I remember when Bobby had a cold and so and so had a flu and Jimmy was vomiting all the time and Johnny was hyperactive in school’,” Randolph says. “Hey I never knew what it was, the doctors never knew what it was maybe it was this lead.”

The future for Calumet residents

So what is happening now for those who live in Calumet and East Chicago?

Those in Zones 1 and 3 are getting assistance to move.

Pence also allocated $100,000 from the Indiana Housing and Community Development Authority to assist with relocation costs for residents of the West Calumet Housing Complex.

“I think by [Pence] coming here it would show the people that he does care.”

Randolph says there needs to be clear communication going forward so the residents of East Chicago can feel safe and know how to proceed. He’d like to see more officials, including Pence, visit to see what is going on.

“I think by him coming here it would show the people that he does care,” Randolph says. “And it would give them some hope, that someone in a key position of being governor of Indiana cares about what happens to them.”

Residents like Florence have many questions that aren’t being answered. The state has allocated money to get more people tested for lead, but Florence wants answers: What is the long-term health plan for people diagnosed with lead poisoning? What will happen to residents like him living in zone 2 and getting no assistance?

The Centers for Disease Control says it costs $5,600 per child to treat the effects of lead poisoning including medical bills and special education.

“Lay the cards on the table now. You can’t pull a magic trick now. Tell us what are we facing, what have we been facing" Florence says. "Not so much the problem now but let’s come up with a solution to this.”

Tags:East Chicagolead contamination
Support independent journalism today. You rely on WFYI to stay informed, and we depend on you to make our work possible. Donate to power our nonprofit reporting today. Give now. 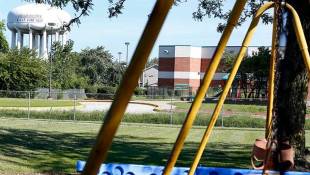 Residents of the West Calumet Housing Complex in East Chicago are working with federal, state and local officials to find new homes because elevated levels of lead have been found in the ground around their home.