Election Day will look a lot different in Marion County this year. There are concerns about the record number of mail-in ballots, a lack of resources and limited in person voting locations.

In the face of the pandemic, Marion County Clerk Myla Eldridge is supportive of efforts to increase mail in voting.

"We want to make sure everyone is safe, right?" says Eldridge, "Voters and poll workers."

But in a recent letter to Indiana’s Secretary of State, Eldridge expresses major concerns about whether or not everyone’s vote will be counted. The county has a shortage of workers and a steep increase in the number of people who want to vote by mail. More than 123,000 applications were received. That is 20 times the number for the 2016 primary, and only 95 percent -- a lot but not all -- could be sent by the deadline.

Of course more people want to vote by mail because it’s safer amid the COVID-19 pandemic. Gov. Eric Holcomb announced the option would be open to everyone, when he pushed the primary Election Day back to June 2.

For voters like Beth Broxmeyer, an Indianapolis resident who is in her 70s, it was a welcome move.

"Now that my husband and I are self isolating, it was very important to get our vote out by mail," says Broxmeyer.

The City-County Council voted in April to send absentee ballot applications to all registered voters, with some opposition from Republican members concerned about the $1 million cost.

But not everyone received the applications, or figured out how to download them online.

And though Broxmeyer got her application and returned it early, she only just received her ballot. Now she worries if it will get in on time.

"So I know that should be postmarked the Tuesday after Memorial Day," says Broxmeyer, "I hope it get’s there by June 2nd, but who knows… who knows."

She’s not alone. The clerk’s office says they have heard of significant delays with ballot delivery from an already stretched postal service.

On Election Day, there are a few different options for people who did not get a ballot, or are worried theirs will not get to the clerk's office in time through the mail.

They can skip the line and hand deliver ballots.

They can have someone else turn in their ballot -- with the proper form filled out, which you can find on vote.indy.gov.

If you mailed an application but did not get a ballot you must turn in an affidavit that swears you have not already voted. That form is available at vote.indy.gov.

"Obviously having to drop it off in person on election day defects the purpose of public safety and using vote-by-mail in the first place," says Vaughn.

Common Cause also requested an extension of the noon deadline on Election Day for absentee ballots to be in -- to match poll closing time, 6 p.m. -- the Marion County Clerk also requested that change.

Many are also worried there will be considerable confusion on election day.

For one, there will be 90 percent fewer places to vote. Three early voting locations, and 22 polling sites will be open. There are usually more than 250 sites.

"We will not have as many vote centers on election day," says Eldridge, "or early voting locations because of the crisis."

Combined with a shortage of poll workers, long lines are expected on Tuesday.

As your normal site may be closed, you can find your closest voting site at vote.indy.gov.

"Bring some hand sanitizer with you, I know there will some at the polls," says Brown. "If you have to wait in line, respect social distancing. If someone is not, ask them to step back a couple of feet."

Marion County poll workers will be provided with PPE. Workers will also be able to socially distance as they take on the task of counting all the absentee ballots.

And with the increased volume of absentee ballots to count, itcould be days before election results are in.

Tags:2020 primaryMarion Countyvote by mailvoting accessMyla Eldridge
Support independent journalism today. You rely on WFYI to stay informed, and we depend on you to make our work possible. Donate to power our nonprofit reporting today. Give now. 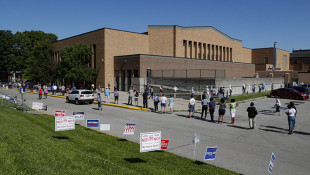 The Indiana Election Commission says counties must finish counting all absentee ballots by noon on June 12.