Pruitt made a short statement outside a shuttered elementary school in the USS Lead Superfund, after a closed briefing with Gov. Eric Holcomb, state and federal lawmakers, and local officials.

“And the reason I’m here is because it’s important that we restore confidence for the people here in this community, that we’re gonna get it right going forward,” Pruitt says.

Pruitt didn’t elaborate on the “concrete steps” officials discussed to restore that confidence. But Robert Kaplan, head of the EPA’s regional office, told reporters the agency is working to speed up excavation of contaminated yards and expand drinking water lead testing – initiatives he says were Pruitt’s idea.

“And I know for a fact that his very first Superfund briefing was East Chicago, and at the end of the briefing he committed to going further,” Kaplan says.

While clean-up is ongoing in Zones 2 and 3 of the Superfund – both private residential areas – Kaplan says work remains at an “all-stop” in Zone 1, which comprises the West Calumet Housing Complex.

The EPA is waiting on East Chicago Mayor Anthony Copeland to provide a redevelopment plan for the soon-to-be-demolished site. But on Wednesday, Copeland reiterated his stance that the EPA has agreed to clean up the neighborhood to a residential standard.

Kaplan says the EPA “made some headway in setting some further meetings up” on the issue Wednesday.

“I think we know where we’re apart, and we need to have further discussions on that point,” he says.

Earlier Wednesday, Pruitt and Holcomb took a driving tour of the contaminated neighborhood. They also heard what Kaplan described as “emotional” testimony from residents.

Prior to Pruitt’s meeting with state officials, the NAACP called on the EPA to do more to help affected residents.

NAACP President Cornell Brooks, members of his organization’s Indiana chapter and East Chicago community leaders wrote a list of demands to present at that meeting.

East Chicago residents say they’re grateful for the NAACP’s help. Tara Adams, who is one of the last remaining residents of the West Calumet complex, says residents haven’t received the attention they deserve.

“We have been going through this, fighting tooth and nail,” Adams says. “So to get the support of an organization that’s been in existence for over 100 years is grand.”

NAACP President Brooks says he’s glad Holcomb has issued an emergency declaration for East Chicago, which he hopes will be extended indefinitely. But he also wishes leaders like Holcomb and Pruitt will spend more time speaking with residents directly.

Brooks says Pruitt, Holcomb, and other Indiana lawmakers were invited to participate in the NAACP meeting, but declined to attend. 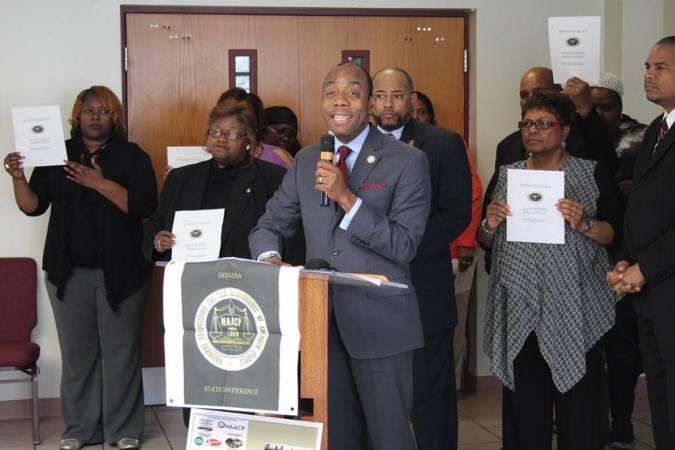 Tags:East ChicagoleadU.S. Environmental Protection Agencylead contaminationNAACPScott Pruitt
Support independent journalism today. You rely on WFYI to stay informed, and we depend on you to make our work possible. Donate to power our nonprofit reporting today. Give now.