A lead-contaminated public housing complex in East Chicago, Indiana could soon become a lead-contaminated vacant lot – and if local and federal officials can’t resolve a key dispute, it might stay that way for a long time.

That’s because the city and Environmental Protection Agency are at odds over redevelopment plans for the neighborhood.

That was around the same time the EPA and city were debating how best to get the lead and arsenic out of West Calumet’s soil. It’s just one part of the EPA’s Superfund site in East Chicago, slated for industrial waste cleanup since 2009.

Back then, the city and EPA weren’t planning to tear down the housing complex. But that changed last summer, when the city learned the contamination was far worse than expected.

The city ordered the complex demolished, and Arshami says his redevelopment plan was scrapped.

“It was a disappointment when we heard about all of the lead issues,” he says. “We really felt that that area offers opportunity for development or redevelopment.”

East Chicago Mayor Anthony Copeland always thought so, too. He’s advocated since 2012 for a cleanup method that would help enable redevelopment in West Calumet.

In a transcript of a public meeting that year with the EPA, Copeland said his greatest fear, once the EPA was gone and the city began redevelopment, was that “our dollars would not be vast enough to even put a dent in the problem and then we would eventually have a wasteland.”

Despite this – and residents’ more immediate fears about their health – the EPA settled on a cleanup method that was less comprehensive, and less expensive, than many wanted. The agency planned to remove just the top two feet of soil, where most contamination lay, and put barriers in place to seal off anything deeper – all, still, without tearing down any homes.

The city’s move to demolish upended the EPA’s plans. An agency spokesperson says in an email that the “future use of the property guides the cleanup.”

She says the EPA has asked the city to provide its plans for the future of West Calumet. But Mayor Copeland has not provided a plan.

The EPA’s 2014 consent decree with the companies responsible for the contamination commits them to cleaning up residential parts of the Superfund to a residential safety standard. With that decree still in place, Copeland says the EPA has to keep its promise – demolition or not.

“Any development there, that will require residents or visitors coming into our city to interact in that area, means that you would have to have a level of safety that says residential standards,” he says, “just like the decree said.”

Ultimately, the EPA can’t stop the city from tearing the complex down. The Department of Housing and Urban Development makes that approval, and regional administrator Jim Cunningham says they’re in the final stages of doing so.

Cunningham says the land will still be part of the public housing system, even when it’s vacant. But since it’s part of an EPA Superfund now, he says he thinks it’s “highly unlikely” HUD would fund housing there again in the future.

So he expects the city will eventually ask HUD to remove West Calumet’s public housing designation altogether. For its part, he says HUD doesn’t need specifics about cleanup and redevelopment plans until then.

Though HUD funding isn’t the only way the city could keep West Calumet residential, architect Taghi Arshami isn’t optimistic it’ll be feasible to build homes on the site in the future. That’s especially if the EPA sticks with its original, topsoil-focused cleanup method, he says.

“I don’t believe it is going to be used as a residential area,” Arshami says, “unless EPA spends substantial amount of money to fully clean it up.”

He thinks it might be better suited for an industrial use, like the one it had before the housing complex was ever built.

Tags:East ChicagoleadWest Calumet Housing Complexlead contaminationEast Chicago Housing Authority
Support independent journalism today. You rely on WFYI to stay informed, and we depend on you to make our work possible. Donate to power our nonprofit reporting today. Give now. 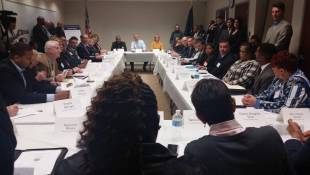 Holcomb On East Chicago Lead Problems: 'We Have To Get This Right'

Gov. Eric Holcomb visits East Chicago, Indiana, a week after declaring an emergency in the city due to lead and arsenic contamination. 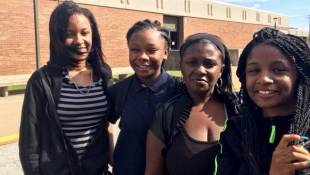 Soil samples at East Chicago's Carrie Gosch Elementary School tested at dangerous lead levels. So the decision was made to move the hundreds of students to a former middle school located across town. 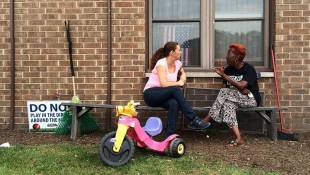