Political cartoonists around the world put pens to paper in solidarity with the slain journalists of Charlie Hebdo, the French satirical newspaper where 12 people, including the paper’s editor, died in a terrorist attack last week.

James MacLeod was one of those artists. He draws editorial cartoons for the Evansville Courier & Press, and is a professor of European history at the University of Evansville. Within a half-hour of hearing about the attack, MacLeod made the drawing, which was widely circulated on social media and even appeared for a time on the U.S. Department of State’s website.

“I felt like I wanted to express the principle that ideas are more powerful than physical violence,” he said.

WFYI: There’s been an amazing outpouring of work like this since this happened. What do you think accounts for that?

WFYI: A former editor of the Onion, Joe Randazzo, said “satire is the most powerful form of free speech because it’s aimed at those in power or those who would express hate.” The journalists of Charlie Hebdo seemed to take particular interest in lampooning extremism of all kinds. What is the value of this kind of work?

JM: It’s always been the case that powerful people hate to be opposed, but they seem to hate most being laughed at. I’ve always felt that mockery is a debilitating weapon. Why is satire such a powerful weapon? Before we had written language we drew pictures. I really believe that somewhere deep down in us we have hardwired responses to simple visual images. A lot of these Charlie Hebdo images – you wouldn’t say they’re great art, they’re just simple line images, and I think they’re very potent because of that.

WFYI: This kind of satire is really unfamiliar and uncomfortable for an American audience, yes?

JM: To an American audience, what you see in Europe is profoundly shocking. Probably the Daily Show and the Colbert Report is as tough as it gets over here. In Britain, where I was born and raised, and in the rest of western Europe, there’s been a long tradition of really savage satire, which continues with these guys. You can go all the way back to the Reformation in Europe and see some of the images – some of the earliest political cartoons – and they’re really searing. I do a lot of public speaking about cartoons, and I’ve got a bunch of images that I sometimes don’t show because they’re not for a family audience. Even by these standards, these guys (at Charlie Hebdo) pushed the line. One of my colleagues said these guys are very close to the line between free speech and hate speech. Some of these depictions of the Prophet Muhammed are not comfortable to look at.

And this makes such an interesting case for a free speech debate. This is not a comfortable flag for us to be waving. That old much-repeated line that we’ve heard so many times this week, “I don’t like what you’re saying, but I am willing to die defending your right to say it. You really had to stand up and be counted this week.

WFYI: Is there a line that you just won’t cross when you’re working on a cartoon?

JM: I’m not sure I’ve ever said to myself ‘I’m not going there’ because of decency. There are certain targets that you hesitate to go after. Do I particularly want to have the police department and the sheriff’s department hating me? Not really. I drew a cartoon critical of our new sheriff very soon after he was elected, and I thought very long and hard about submitting it to the paper.  But I did, and they ran it, and I haven’t had any speeding tickets. I personally would not draw the Prophet Muhammad the way these guys drew him. I don’t want to go out of my way to hurt people’s feelings. I think sometimes the guys at Charlie Hebdo, they had too much fun. I had to ask: are you going after extremism, or are you just seeing how far you can go? 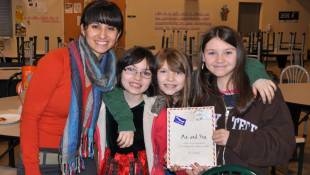 Making sense of war is hard to do. When that wasn't working for expatriate Syrian Soulaf Abas in Terre Haute, she started making art and making compassionate connections between kids on different sides of the world. 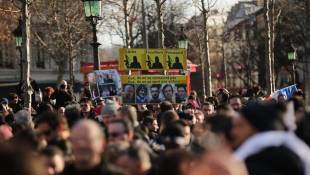 Hundreds of thousands of people are expected to march in solidarity with the victims of last week's attacks and in support of free speech.