INDIANAPOLIS -- Founded amidst controversy over the state’s new religious freedom law, Indiana’s First Church of Cannabis Wednesday hosted its first service on the same day the law went into effect.

But for all the talk and praise of the church’s professed holy sacrament, none of the actual herb was smoked during the service.

"It brings us closer to our self and closer to others," Levin said. "It is the fountain of health, our love, curing us from illness and depression. We will embrace it with our whole heart and spirit…individually and as a group."

More than 100 worshipers gathered in the sanctuary — an overflow crowd stood outside. Attendees provided testimonials about how cannabis had positively affected them. But, when it came time to close the service with a sacramental smoking, there wasn’t a joint, bong, or bowl in sight. Levin says that’s because local law enforcement last week warned that anyone smoking pot or even attending the service risked arrest.

"Well, we had a little intimidation regarding our religious beliefs," Levin said.

The First Church of Cannabis could present one of Indiana’s first test cases for the state’s Religious Freedom Restoration Act, or RFRA, passed earlier this year. Law enforcement made no arrests at Wednesday’s service. But Levin has said he may take his case to civil court, claiming law enforcement threats prevented church-goers from acting on their sincerely held religious beliefs. If or when Levin decides to do so, he could then invoke RFRA as a defense.

Tags:First Church of CannabisBill LevinReligious Freedom Restoration Act
Support independent journalism today. You rely on WFYI to stay informed, and we depend on you to make our work possible. Donate to power our nonprofit reporting today. Give now. 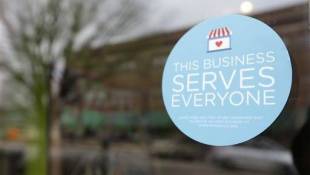 On Day One of RFRA, Groups Vow Push for Expanded Civil Rights

On the day Indiana's so-called "religious freedom" law took effect, advocates for the LGBT community said they're going to organize a voter registration drive as part of their push to obtain civil rights protections for the gay, lesbian, bisexual and transgender community.