First Mayor Of Fishers Sworn In

After 142 years, town of Fishers becomes a city on Jan. 1. And with that comes its first mayor -- Scott Fadness. Fadness, the former town manager, was sworn into office Monday along with the city’s first clerk and council members.

This historic change happens as a commercial boom is underway in Downtown Fishers. Five major developments are ongoing at a cost of nearly $100 million dollars in public and private funds. Mixed-use projects like The Depot at Nickel Plate and the The Switch are transforming 116th Street and creating new sense of place in Fishers.

And Fadness has helped drive much of this change.

Residents of the new Hamilton County city won’t notice much change at first but they will start to learn more about Fadness, a Republican, who will be the face of Fishers and a champion for its growth. Until now, he has worked mostly behind the scenes.

“The biggest change people will see is that there is just going to be one individual more than anyone else speaking on behalf of the community and driving an agenda," Fadness says. "Which is something that we just never really had before.”

Fadness wants to make Fishers a hub for entrepreneurs. That type of vision will gin-up competition for start-ups and other businesses among its Hamilton County neighbors -- Carmel and Westfield.

But first, Fadness says residents still need to be educated about what it means to be a city. One change is the city council expanded from seven to nine seats.

“I don’t think people really know what to expect. Some people will say ‘well, this will be big government and now there’s a politician running around.’ Other people will say, ‘thank God we have a mayor,’ and think it is exciting," Fadness says. "And others will think, ‘I have no idea what it means.’ I would put most people in that category, frankly.”

At Claude & Annie’s tavern off State Road 37 in Fishers, owner Bill Smythe mingles with customers and gauges their feelings about living in a soon-to-be city. Most, he says, aren’t thinking about it.

He could be right.

Only 15 percent of Fishers registered voters cast a ballot in the May primary for mayor. Fadness won the six-way race with 4,200 votes. He wasn’t challenged in the November election.

Smythe, a Republican who’s not shy about ruffling feathers, still isn’t convinced becoming a city was the right move for Fishers. He previously favored a restructuring of Fishers government and keeping a town manager position. Smythe supported Fadness in the election and has confidence in him. But as January nears, Smythe is taking a wait-and-see approach.

“I think now we are going to end up with a mayor. We could end up with a good one, or we could end up with a Brainard perhaps a Ballard. There are a lot of variations as to what is a good mayor," Smythe says. "I think when the mayor’s vision is to use taxpayers’ money to either reward their partner or cronies or whatever -- that is not a good use of the government position.

"If it is to induce or incent development and increase the tax base, then I think that is a better use of it.”

But one regular customer of Smythe's bar is looking forward to the City of Fishers. Sean Tailby moved to Hamilton County from the United Kingdom about 16 years ago. He hopes Mayor Fadness can “Carmel-lize” Fishers. Tailby says that means projecting a bold vision and making executive decisions.

“I am sure January 1 we might be a bit foggy first thing in the morning, anyway. So we will gradually see how it is implemented. There is going to be speed bumps along the way, obviously," Tailby says. "I think the transition should be very interesting and positive for the town of Fishers -- the city of Fishers.”

Fadness first move as mayor could come in February when he gives Fishers’ first ‘state of the city’ address.

Fadness, clerk Jennifer Keh and the city council members were sworn in for a one-year term. They all face a reelection in 2016. The deadline for them and challengers to file for the spring primary is in February. 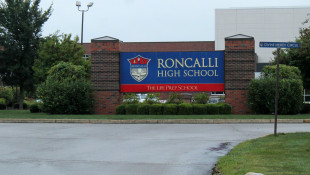 A second school employee filed a discrimination charge against Roncalli High School and the Archdiocese of Indianapolis Friday. 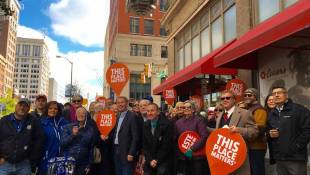 No one remembers exactly when the L.S. Ayres clock stopped, but earlier this year, Indiana Landmarks launched a fundraising campaign to get it going again. In less than a month, the preservation organization had raised $60,000 - enough to restore it to its former beauty and establish a repair fund.