A public visitation is scheduled from noon to 8 p.m. Friday at the downtown Gary convention center, where Hatcher will lie in state. His funeral services are scheduled to begin at 1 p.m. Saturday at the center. Both events are open to the public.

He was 34 when he was elected Gary's mayor in 1967, becoming one of the first black mayors of a big U.S. city.

Hatcher became the political face of Gary and a political force for blacks after his ground-breaking election.  He had to overcome opposition from the local Democratic machine to become mayor of what was then Indiana's second-largest city. He went on to serve five terms.

He also organized the 1972 National Black Political Convention in Gary and worked on Jesse Jackson's Democratic presidential campaigns in 1984 and 1988.

Tags:Richard HatcherGary
At WFYI, our goal is to cover stories that matter to you. Our reporting is rooted in facts. It considers all perspectives and is available to everyone. We don't have paywalls, but we do need support. So if unbiased, trusted journalism is important to you, please join us. Donate now. 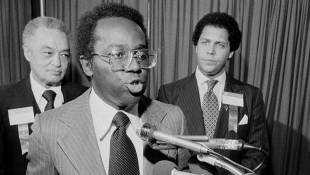 Richard Hatcher, one of the first African American mayors of a large U.S. city, died Dec. 13. He was 86.
Read More