This story has been updated to include the full statement from Indianapolis City-County Council president Vop Osili.

Several members of the Indianapolis City-County Council were aware of the alleged racism within Indianapolis Public Library (IndyPL), according to former and current board members.

Dr. Terri Jett, who was appointed to the library board of trustees by the council in 2016, said councilors never asked about her experiences on the board, nor was it requested that she report back to the council on the work the library was doing.

Jett said when she told some councilors about her experiences on the board, including mistreatment involving racism and sexism from IndyPL leadership, nothing happened.

“There could have been some pressure from their end to take a closer look at what’s going on in the library,” Jett said. “If they had paid closer attention, they could assess if the public is really being served in the best way possible, and to make sure public employees — who they also serve and should care about — are being treated fairly.”

Jett and others have accused IndyPL leadership of racism, including punishing Black workers disproportionally.

Jett said she told City-County Council President Vop Osili, as well as councilors Zach Adamson and Leroy Robinson, about what was going on. She said the conversations happened in late 2020 and earlier this year. Jett said the councilors told her they would look into the situation but that many of her follow-up emails went unanswered.

In April 2020, Jett was informed she would not be reappointed to the board. Jett said Osili “promised my seat” to current board member Hope Tribble, who could not be reached for comment.

“Dr. Jett, whose term as a Library Trustee expired earlier this year, raised important concerns about operations at the Public Library. To address these issues, Hope Tribble, who provided significant leadership to the City of Indianapolis’ racial equity initiatives during her tenure as Director of the Office of Audit and Performance, was appointed to the Library Board of Trustees,” Osili said in a statement. “Ms. Tribble’s extensive experience in local government, policy making, and fiscal matters, will ensure these critical issues are addressed. I am grateful to Dr. Jett for giving voice to these concerns and for her years of service to the library.”

Current board of trustees member Dr. Patricia Payne said the work Jett did on the board was a good reason to reappoint her and that she told Osili she wanted Jett to remain in that position.

“I wanted Terri to stay on the board, because we were doing some important work that was challenging what was going on in the library,” Payne said.

Payne confirmed in a previous interview she believed much of the alleged mistreatment of Jett stemmed from racism and sexism.

Adamson said he doesn’t recall everything he spoke with Jett about but doesn’t believe racism was a factor.

“I don’t know that I recall racism,” Adamson wrote in an email to the Recorder. “I think the bigger issue is that Terri is a persistent advocate for the issues she believes in, and I think it was probably more sexism and trying to muzzle ‘trouble makers.’ She was very vocal, and I think power structures resist change makers. I do think they treated her badly and unprofessionally but not sure I’d say it was because she was Black but probably more because she was female and assertive.”

Payne said Osili never gave her a specific reason for why he didn’t reappoint Jett, but she thinks it was a result of Jett’s disagreements with IndyPL leadership.

“I think he was probably asked [by IndyPL leadership] not to reappoint her,” Payne said. “I have nothing factual to prove that, but that’s what I think happened.”

Jackie Nytes, CEO of the Indianapolis Public Library, said while she has suggested names of people who expressed interest in serving on the board over the years, she has no say in who gets appointed.

But Nytes’ former work as a councilor has raised some concerns about the link between the council and the public library. From 2000 to 2011, Nytes represented the city’s 9th district. Former board president Joanne Sanders served as an at-large councilor in the same time frame, and Cory O’Dell — who was censured by the council in 1999 for entering votes for an absent councilor — works in the library’s human resources department. O’Dell was unavailable for comment.

“In the executive leadership positions, there are people who do not deserve and who do not have the background nor the education to be in those positions,” Jett said. “I think there are many instances of people, even without political ties, getting some favoritism from [Nytes] for their loyalty. They’re being rewarded for their loyalty, which is a traditional political operation.”

Payne said current councilors are often afraid to address the allegations brought before them for fear of hurting their political aspirations. Nytes, she said, has the influence to help — or hinder — the careers of local lawmakers.

“That’s the way things work in this city,” Payne said. “When you want to further your career, there are people who you believe can help you do that. … I would certainly make a great assumption that Jackie does have power in this city, and there are some people who fear standing up to her, and in many cases, she gets her way.”

Nytes said the accusations of favoritism and influence are untrue.

“I finished my three terms on the council at the end of 2011,” Nytes wrote in an email. “Any suggestion that I had that much influence after that doesn’t fit with how the council operates. Since I have been at the library, I have focused on serving underserved neighborhoods, increasing access to libraries and answering questions when appearing before the council committees. I am not a player in those political circles.”

Michael Torres, president of the Library Workers Union, said IndyPL leadership has been in “crisis mode” since the Indianapolis Recorder began reporting on accusations of racism in May. Leaders are working to repair the library’s standing in the community.

The Central Indiana Community Foundation (CICF) — a large donor for IndyPL — shared a Facebook post June 21 with its concern about the allegations.

“We are disheartened and concerned by recent testimony from [IndyPL] staff and board members, particularly Black women, about experiences of inequity and bias,” the post read. “… The Indianapolis Foundation is committed to equity and anti-racism and we are committed to doing our part in working with [IndyPL] leadership and staff to ensure that libraries in our community live up to those values externally and internally.”

Despite the problems, Payne is confident the upcoming internal climate study, led by board member Dr. Khaula Murthadha, will give the board valuable insight into how staff members are feeling.

“I’m absolutely confident in the study,” Payne said. “This time, we aren’t going to let them move this to some other kind of study that doesn’t really get to the heart of the problem. We’ve got work to do.”

Tags:Indianapolis Public LibaryracismdiscriminationIndianapolis City-County CouncilVop Osili
Support independent journalism today. You rely on WFYI to stay informed, and we depend on you to make our work possible. Donate to power our nonprofit reporting today. Give now.

Friday in Indianapolis, Martin University honors that history with a new National Center for Racial Equity and Inclusion. It aims to foster, support and sustain equity through workshops, lectures and other programs. WFYI's Terri Dee spoke with President Sean Huddleston about that work. 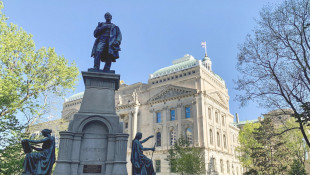 Indiana Legislative Maps Among Most Biased In Country, Says Study 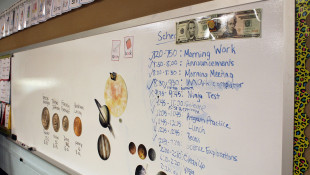 According to an analysis from the Center for Business and Economic Research at Ball State University, Indiana saved nearly $90 million during the 2019-2020 school year because of school choice.