The list of candidates running for Mayor of Indianapolis is one name shorter.

Democrat Frank Short is pulling out of the race. The Washington Township trustee made the announcement today, Wednesday.

Short has lived in Indianapolis for 33 years.  It’s where he met his wife and raised his family. So, he got in the race with the intention of giving back to the city he loves.

But, with former U.S. District Attorney Joe Hogsett expected to put his hat in the ring, Short decided to bow out.

"I don't believe that a divisive primary helps elect a Democrat to the Mayor's Office, and I think we need a democrat in the Mayor's Office," he said.  "My goal has always been to build a better Indianapolis. So, today with that thought in mind, I announced that I was suspending my campaign for mayor and endorsing my friend, Joe Hogsett, who I think with his crime fighting experience makes him the best person to lead our city and ensure that it will be a safe place to live and raise our families."

Hogsett is not officially a candidate yet. He has opened an exploratory committee and is expected to make a decision in the coming weeks.

"As a party, I'd like us to find one candidate," said Short.

Current Mayor, Republican Greg Ballard hasn’t determined if he will seek another term.

As for Short, he is going to continue to serve as a Washington Township trustee. 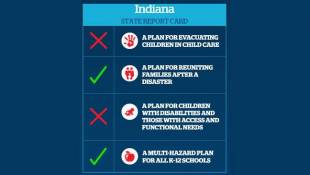 A national report card for emergency preparedness ranks Indiana among the least prepared states when it comes to emergency plans for schools and child care facilities. The state does not meet half of the minimum standards for addressing natural and manmade emergencies