INDIANAPOLIS – Indiana Fever fans will have a chance to get free tickets to see Game 3 of the WNBA Finals at Bankers Life Fieldhouse.

The tickets will be distributed Wednesday at the Bankers Life Fieldhouse Box Office, beginning at noon.  Fans may collect up to four tickets per person.

This year’s championship is a rematch of the 2012 Finals, when the Fever defeated the Lynx to collect their first WNBA championship.

The Fever took a 1-0 lead in the best-of-five series on Sunday, beating the Lynx 75-69 in Minnesota. Game 2 is tonight in Minnesota with tip off scheduled for 8 p.m.  The Fever will return to Indianapolis for Game 3, Friday at Bankers Life Fieldhouse.

Tags:IndianapolisWNBAIndiana FeverWNBA Finals
Support independent journalism today. You rely on WFYI to stay informed, and we depend on you to make our work possible. Donate to power our nonprofit reporting today. Give now. 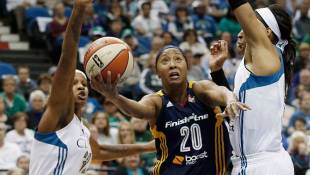 Briann January had 19 points and six assists and the Indiana Fever stole home-court advantage in the WNBA Finals with a 75-69 victory over the Minnesota Lynx in Game 1 on Sunday.