INDIANAPOLIS (AP) — Long-struggling Gary, Indiana, is hoping to stand out in Amazon's search for a second headquarters site by offering a chance to pull the city from its decades of economic decline.

Indianapolis-area leaders are also making a pitch to Amazon, but aren't talking about their bid for its promised 50,000 jobs.

Gary Mayor Karen Freeman-Wilson says her city offers Amazon a chance to leave a greater legacy by transforming the community. She is touting Gary and the surrounding northwestern Indiana area's proximity to Chicago, access to available land and Indiana's lower taxes than Illinois.

The mayors of Indianapolis and the suburban city of Fishers announced last month they would collaborate on an Amazon proposal, emphasizing the area's current tech business community and available sites for the new headquarters.

Read More: Why Indy Would Be A Longshot To Land Amazon's New HQ

Tags:GaryKaren Freeman-WilsonAmazonHQ2
Support independent journalism today. You rely on WFYI to stay informed, and we depend on you to make our work possible. Donate to power our nonprofit reporting today. Give now. 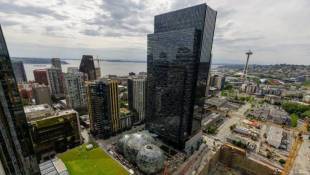 'A Major Distraction': Is A Megadeal Like Amazon's HQ2 Always Worth It?

Amazon's unmatched promise of 50,000 well-paying jobs has red carpets rolling out across the U.S. - but also some soul-searching. How much should communities subsidize wealthy American corporations?