The bill indefinitely extends parts of Holcomb’s emergency declaration to expand lead testing in the city’s soil and water.

The legislation, authored by state Rep. Earl Harris, Jr. (D-East Chicago), qualifies parts of the city where lead is known to be present in soil, or where that is “probable,” for the ongoing emergency status.

Harris’ legislation originally proposed soil lead testing throughout the city. Community leaders, including Reverend Cheryl Rivera, have urged lawmakers to add that provision back in.

“I am here because what we need and what we want is city-wide testing of the water and the soil,” Rivera told lawmakers in testimony at the Statehouse in February.

Lawmakers say they chose to limit soil testing to these “areas of special concern” because unlimited, city-wide soil testing would have been prohibitively expensive.

The bill Holcomb signed also requires the Indiana Housing and Community Development Authority to provide assistance to the U.S. Department of Housing and Urban Development.

And it orders the Indiana Department of Environmental Management to annually test the city’s water supply for lead. Typically, that testing takes place every three years.

“I’m proud of the all-hands-on-deck approach we’ve seen among local, state and federal officials to provide support and assistance to East Chicago residents,” Holcomb said in a statement. “I sign this bill without any hesitation and stand with our partners to continue efforts to meet the needs of these residents.”

On April 19, Holcomb met with Environmental Protection Agency Administrator Scott Pruitt, residents and local lawmakers in a closed-door briefing on the ongoing response to the city’s contamination crisis.

After that briefing, Pruitt said the EPA is committed to continuing and expanding its cleanup efforts, though some residents say they want more concrete proof that will happen.

Tags:East Chicagoleadlead contamination2017 legislative session
Support independent journalism today. You rely on WFYI to stay informed, and we depend on you to make our work possible. Donate to power our nonprofit reporting today. Give now. 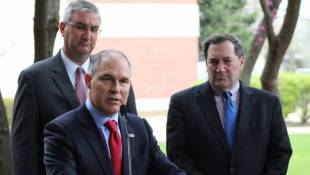 The NAACP and East Chicago residents are calling on the EPA for more resources as Administrator Scott Pruitt visits the lead-contaminated neighborhood.