INDIANAPOLIS -- Indianapolis Mayor-elect Joe Hogsett could earn $30,000 more a year than his predecessor when he takes office next year as the city council considers raises for both its own members and the mayor.

Right now, the mayor of Indianapolis is a $95,000 a year gig, plus other benefits like a deferred compensation account and a car. City lawmakers will introduce a bill on Monday to raise the base salary to $125,000. That would still be less than what several other mayors in the region are paid each year.

Hogsett, a Democrat, said at a news conference this week he wasn’t aware of the specifics of the possible pay bump. "Obviously, I did not run for this position because I was concerned about the salary," he said. "So I’ll defer to the judgement of the leadership that’s currently in power."

The council president, Democrat Maggie Lewis said she hadn’t had a conversation with Hogsett yet about the raises. She says it’s been more than a decade since councilors saw a significant raise in their pay.

"We believe that it’s important that we do look at those salaries because we want to ensure that we have the best and the brightest that are responsible for running our city," she said.

Lewis says councilors in surrounding counties are paid more than in Marion, which is true. With the change, councilors would make a base salary of $16,400 per year, four grand more than they currently do. They also earn a $112 per diem for each full meeting they attend. Leadership positions come with extra pay.

The current pay grade for Indy mayor is much lower than what chief executives in big Midwestern cities earn. Down Interstate 65 in Louisville, Mayor Greg Fischer earns $118,000. Along I-74, Cincinnati Mayor John Cranley is paid $133,000. The Mayor of Cleveland is a $136,000 per year job. And in St. Louis, being mayor earns a $131,800 paycheck.

If the Indy council approves the salary increase, the pay for mayor of the state's biggest city would still be less than at least one of its biggest suburbs. Carmel's city councilors, just to the north, voted this year to increase the pay of longtime Mayor Jim Brainard to $127,946. Council members in the wealthy suburb will be paid $17,246.

Before leaving his post as Indianapolis' public safety director in July, Troy Riggs brought up the issue of low pay for city department heads.

Tags:Joe HogsettMayor of IndianapolisCity-County Council
Support independent journalism today. You rely on WFYI to stay informed, and we depend on you to make our work possible. Donate to power our nonprofit reporting today. Give now. 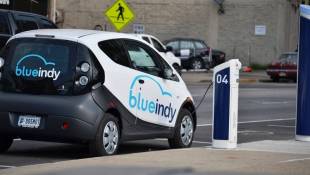 Indianapolis lawmakers' threat to tow the BlueIndy electric rental cars in a show of protest is on hold for another few weeks. Meanwhile, BlueIndy says its launch is going well.