Mayor Focuses On City's Youth In State Of The City Address 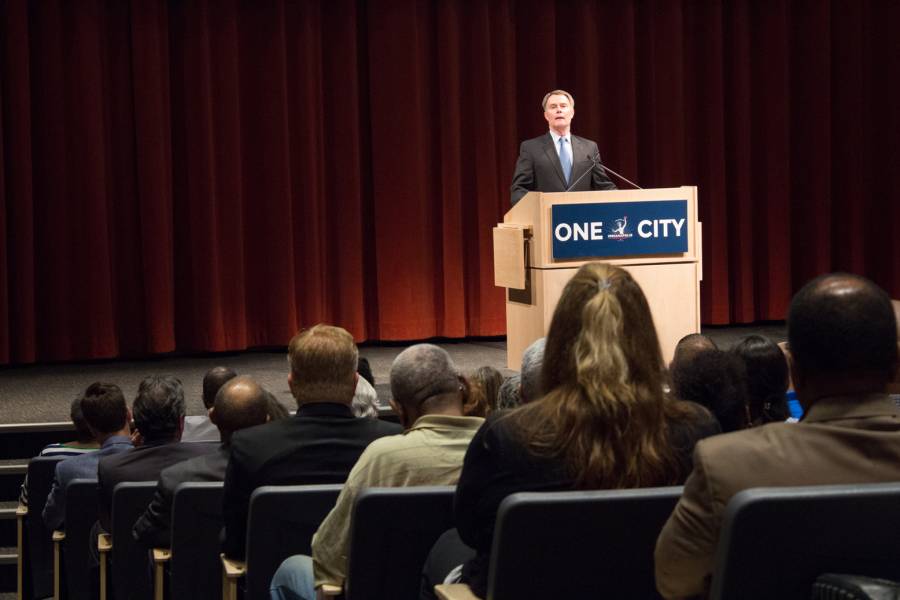 Mayor Joe Hogsett said in his speech Wednesday that unity, peace and prosperity are "not so distant" in Indianapolis. (Photo by Drew Daudelin)


Indianapolis Mayor Joe Hogsett delivered his State of the City address Wednesday to a packed auditorium on IUPUI’s campus.

In a speech that sometimes described Indianapolis as a bleak, dangerous place, the mayor injected a message of hope by focusing on the city’s youngest residents.

“The question we must confront, is what can we do to restore credibility in the minds of our children that our community cares deeply about their success?” Hogsett said.

The mayor talked about helping the city’s disadvantaged youth in two ways.

One is an attempt to curb gun violence. The city worked with IMPD to create an anonymous tip line to report illegal weapons. If the tip results in a felony or misdemeanor, the person who tipped gets a cash reward.

The other is about education. Hogsett says just 28 percent of Marion County residents currently hold a Bachelor's degree. A new project called the Indianapolis Promise hopes to increase that number significantly, but details right now are scarce. A new task force created this December will work to figure out what the city can do.

Finally, the mayor announced a goal to rehab, transform or demolish 2,000 homes within the next two years. And he says they’ll replace those sites with homes that are "affordable for all."

This is Hogsett's second State of the City address. He gave his first in May 2016, just three months after taking office. In that speech the mayor focused on jail overcrowding and urged lawmakers to provide pre-K education for all Indianapolis school children.

Hogsett also spoke in 2016 about creating a criminal justice task force. One year later, that team is rolling out its plan for a new justice center campus, a project the Greg Ballard administration tried and failed to complete.

Here is what the mayor's office says are its major accomplishments in 2016:

Tags:Joe HogsettMayor of IndianapolisIndianapolisState of the City address
Support independent journalism today. You rely on WFYI to stay informed, and we depend on you to make our work possible. Donate to power our nonprofit reporting today. Give now.