Roach began his career with IMPD in 1991 as a patrol officer in North District. He's worked as a narcotics detective, served on the department's SWAT team, and supervised the North District Neighborhood Resource Unit. He has held every rank, merit and appointed, within the police department over the past 26 years. In 2014, he was appointed Deputy Chief of Administration.

“Throughout his career, Bryan has proven himself an exemplary officer and a dedicated leader – with an incredible commitment to the community that has shaped him,” Hogsett said. “Bryan’s leadership, experience, and vision, are exactly what this police department needs to continue addressing the root causes of crime and make our city safer.”

Roach said that he is committed to the community policing initiatives rolled out under his predecessor, former chief Troy Riggs. And he says trust and transparency are essential for building good relationships between the police and the community.

"There are hundreds of thousands of opportunities each year for individual officers to interact with individual citizens," Roach said. "Our officers must treat people as people, no matter the circumstances. It's every interaction that builds that trust and that understanding."

For the last six months, Roach has served on the Mayor’s Criminal Justice Reform Task Force, which released its recommendations in December.

Roach's appointment offers continuity for a department that's challenged by a rising homicide rate and the effects of poverty in many neighborhoods. He said Wednesday that he's committed to the job for at least three years -- if the mayor will have him, he added.

Deputy Chief Valerie Cunningham, who filled in briefly for Riggs after he resigned at the end of December, said she never wanted the job permanently and instead campaigned for Roach. She is expected to step into Roach's previous role as deputy chief of administration.

"We both see this as an opportunity for our agency to continue on a positive path, uninterrupted. Chief Riggs set us on an excellent path. Chief Roach will go down that path with the accelerator floored," Cunningham said.

As an insider, Roach knows the challenges that face IMPD, including matters of budget and staffing. Hogsett has pledged to raise the number of officers from its current 1,500 to more than 1,700 by the end of his first term.

Roach has received awards and recognition for his work. In 2016, he was awarded the Jake Laird Local Public Safety Hero Award. In 2015, he was presented the Hulman Health Achievement Award by the Indiana Public Health Community for being instrumental in Indiana’s first law enforcement life-saving program for opiate overdose victims.

Roach grew up in Indianapolis and is a graduate of IUPUI. He is a graduate of the Federal Bureau of Investigation’s National Academy, served as an IPD SWAT team member from 1996 to 2005, and has been awarded two Medals of Valor and the Medal of Merit. 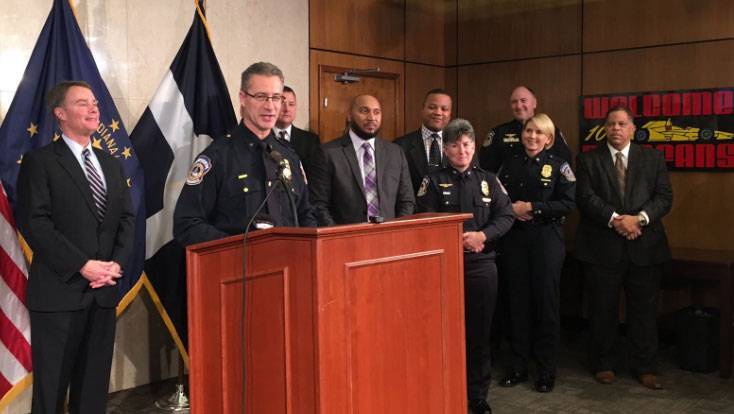 Tags:Joe HogsettIMPDIndianapolis Metropolitan Police DepartmentIndianapolisBryan Roach
Support independent journalism today. You rely on WFYI to stay informed, and we depend on you to make our work possible. Donate to power our nonprofit reporting today. Give now.