The Democrat also plans to form an exploratory committee to consider a run for Mayor of Indianapolis.

"It is a wonderful city in so many different ways, but it also is  faced with enormous challenges," said Hogsett.

Hogsett says he loved his four years as U.S. District Attorney, but the increase in violent crime around Indianapolis motivated him to explore interests where he can have a different impact.

"The Department of Justice is very clear, your job (as U.S. Attorney) is to prosecute wrongdoers, hold them accountable, put them in jail, and that's it.  While important, that won't resolve what I believe the challenge that Indianapolis currently faces," he said.  "Now that I am freed from the restraints of the United States Attorney's Office and am able to engage people in conversations about all those other aspects of making this a safer place, I hope that I can serve a very positive and vigorous role in helping making our neighborhoods as safe as they can possibly be."

Hogsett says his interest in running for Mayor is in its infant stages and he hasn’t begun to fill out the paper work.

But, he is beginning to lay out his priorities and at the top of the list is addressing violent crime.  He believes current Mayor Greg Ballard has been slow in responding to the problem.

Hogsett says under his leadership, the U.S. Attorney’s office has been active in addressing the issue, including taking down drug cartels, biker gangs, and lauching a violent crime initiative in March of 2011.

Hogsett does credit Ballard for the crime reduction plan he released last week that includes investing in preschool and hiring more police.

But, he’s concerned with raising taxes for officers, especially when the city decided not to apply for a federal grant that would have paid for hires.

"Understanding that at some point in time the federal money runs out and you have to find a funding source, but they pass up the opportunity to take advantage of federal funds and, yet, two or three weeks later, come forward with a tax increase proposal to try to put more police officers on the street," said Hogsett.  "If I had been the decision maker, I'd take as full use of federal resources as I could possibly take."

Hogsett says he also is focused on improving education quality in the city and job opportunities, specifically for middle class Hoosier families.

Hogsett is expected to fill out the paper work to officially announce his candidacy for Mayor within the coming weeks.

So far, Indiana Rep. Ed DeLaney and Washington Township Trustee Frank Short are the only two Democrats to announce they will run for mayor next year.

In response to Hogsett's announcement, Marion County Republican Chairman Kyle Walker said,  "To say that no one is surprised Joe Hogsett is running for yet another office is an understatement.  He is a career politician who has run for five different offices and has now broken a pledge to serve the rest of a term of office twice in his efforts to climb the political ladder. Just a few months ago, Joe Hogsett declared he had a 'moral obligation' to serve his full term as U.S. Attorney and now he turned his back on that commitment."

Tags:Election 2016Joe HogsettMayor of Indianapolis
Support independent journalism today. You rely on WFYI to stay informed, and we depend on you to make our work possible. Donate to power our nonprofit reporting today. Give now. 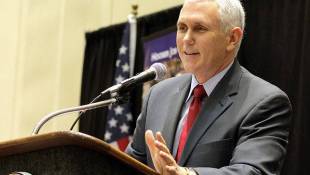 Pence says there are scenarios in which Indiana might not move ahead with healthcare expansion as the state and federal government discuss the proposed plan known as HIP 2.0. He says "differences remain." 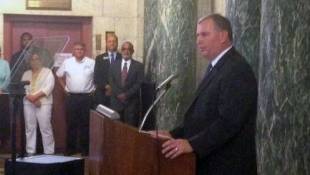 Mayor Greg Ballard says he will commit $25 million over five years to make preschool more affordable for families. It's part of a larger crime-fighting plan that would also include 20-year mandatory minimum sentences for crimes with a gun. Ballard's plan would pay for education by eliminating the local homestead tax credit.