Indiana’s proposed federal education plan has been published online and it is now in the hands of Gov. Eric Holcomb.

Indiana is required to submit a new federal education plan this year as part of the Every Student Succeeds Act, which replaced the No Child Left Behind law in 2015.

READ MORE: Indiana Plan Under the Every Student Succeeds Act

The plan includes the state’s academic standards, how students will be tested on those standards and plans to help to failing schools.

One change includes state superintendent Jennifer McCormick’s recommendation to use student attendance as a factor in determining a school’s A-F accountability grade.

States must receive approval of their plans from the U.S. Department of Education to keep receiving hundreds of millions in federal funds.

Indiana’s plan includes major goals on improving student success. One of those is closing the achievement gap in English and mathematics by 50 percent by 2023 for special education students, students of color and other unique populations.

Holcomb now has 30 days to review and edit the plan, according to the Indiana education department. His approval is not required by the federal government.

As reported previously, the ESSA requires states to report graduation rates in a uniform manner. The rule change means Indiana’s least rigorous diploma, the general diploma, would no longer count in graduation rates.

Shortly after taking office in January, McCormick initiated a seven-month feedback process for the public and educators to comment on the plan.

Tags:U.S. Department of EducationJennifer McCormickEvery Student Succeeds Act
At WFYI, our goal is to cover stories that matter to you. Our reporting is rooted in facts. It considers all perspectives and is available to everyone. We don't have paywalls, but we do need support. So if unbiased, trusted journalism is important to you, please join us. Donate now.

Gary's mayor wants the city's school corporation to demolish 10 shuttered schools amid growing concerns that they have become havens for crime.
Read More 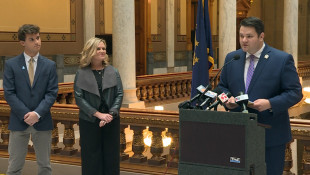