Same-sex couples from Indiana are heading to Chicago as oral arguments begin on whether or not the state can ban them from getting married.

Monday, plaintiffs in the case joined supporters in downtown Indianapolis as part of a sendoff celebration.

For three days, starting on June 25, couples like Greg Hasty and CJ Vallero of Fishers could legally marry in Indiana.

A federal judge ruled the state’s ban of same-sex marriage was unconstitutional and when Hasty and Vallero heard the news they moved quickly, exchanging vows the first day they could.

"I woke up on (June) 26th and I felt different," said Hasty.  "It felt good.  It felt like a weight had been lifted from our shoulders, that I was securely married to the person I love, that we are protected together, and we can build this relationship going into the future.  So, it feels different for all the right reasons."

But, the decision to allow same-sex marriages in the state was later stayed.  Now, Hasty and Vallero are traveling with other Hoosier couples to hear the case tried before the U.S. Court of Appeals for the 7th Circuit in Chicago.

"I think clearly the facts are on our side.  The facts are on the side of equality and so we are really optimistic about what will happen," said Hasty.  "So, we are just excited to finally be here and have our day in court again and have another judiciary decide that love is love."

Indiana is one of 13 states where judges have struck down same-sex marriage bans, but the rulings are currently stayed as they head to the appellate courts.

There are 19 states that allow gay marriage.

Tara Betterman-Layne and her wife, Melody, have been together for five years and have a daughter.  They married in New York in 2012, but the excitement of marriage was tainted when they traveled home to Indianapolis.

"When we left New York state, it was like, 'oh my god, we're not married here'," said Tara.   "In each state we went through we played the 'are we married here' and when we got home to our own state it was so disheartening to know that, yea, we had this wonderful day and marriage, the commitment to each other, but when we say or introduce our spouse here (in Indiana) you have to wait for the cringe or the response because it's not accepted here."

Tara and Melody are also part of the Indiana delegation going to Chicago.

Melody said she feels a shift changing in her home state and thinks Indiana is ready to accept marriages of all people.

"Once it's recognized here, no one can tell us that they will not treat us as a married couple.  Everyone has to accept who we are to one another and afford us the respect a marriage provides," she said.

The Court of Appeals is hearing cases on the bans in both Indiana and Wisconsin Tuesday.

Right now, only one Hoosier same-sex marriage is legally recognized.

The 7th Circuit acknowledges the marriage of Amy Sandler and Niki Quasney, who is battling terminal cancer. 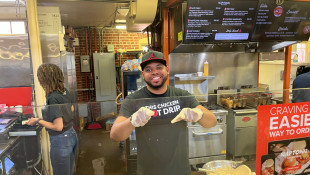