For the month of September, we're bringing you stories of workers across Indiana, about what they do and how they find meaning in their jobs. This week, Indiana Public Broadcasting’s Justin Hicks profiles Dexter Loftin, a friction welder at Manufacturing Technology Inc. in South Bend. Dexter started working there through a prison re-entry program.

"We do pistons, we do things for the airline industry. We do things for NASA and the SpaceX program," Dexter Loftin said while giving a tour of the factory where he works. "Man, I’m doing some great things here. And I’m moving some big parts and I'm working on some very big machines. I’m working on the world’s largest friction welder. It’s beautiful. It’s good. It’s a good feeling.

"On my shift we weld about 500 to 550 of these," Loftin said, showing a eyelet welded to a short metal tube that will eventually end up going in a shock on a truck. "Seeing the finished product and what it becomes, and what it's going to and the trucks it's going on – it’s pretty cool, it's a pretty neat thing to do."

"It's an amazing feeling to know that you took part in something that's going up in the air, into the atmosphere that you helped – basically put in circulation. No one will probably know, that hey, that guy over there, Dexter Loftin did this. But Dexter Loftin knows he did that. They might not give me a plaque or say, hey, that's the guy. But hey, I love doing my job, I love it.

"They gave me a shot and opportunity and I'm running with it.

"The things I learned at the re-entry center is just, how to be patient. Be humble, just stay focused, keep that motivation and drive that you have within you burning and just stay on the path. And then just–the doors will open for you.

"When I finally did a job setup myself and accomplished it, that was definitely a proud moment for me. I came in early in the morning, and – he’s my general manager, right now – he hands me the blueprint and he says we need to set this machine up. But I had never done it by myself. I was a little nervous and I wanted to prove myself. But I was more nervous. And I set it up. And that was my first moment where I was like, I can do this.

"I have a son and a daughter. My son is 22 and my daughter is 21. They’re hard working, they’re still young kids at heart. Still growing up, but hey, they’ve got that work ethic in them, so I’m proud of them. That’s my world, my family.

Tags:Hoosier workers
Support independent journalism today. You rely on WFYI to stay informed, and we depend on you to make our work possible. Donate to power our nonprofit reporting today. Give now. 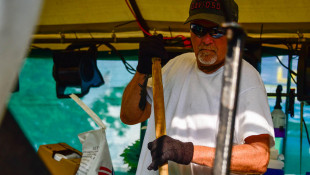 Every September opens with Labor Day -- a celebration of those who work in America. This month, we're bringing you stories of workers across Indiana, about what they do and how they find meaning in their jobs. 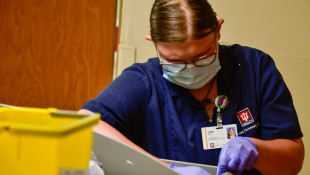 For the month of September, we're bringing you stories of workers across Indiana, about what they do and how they find meaning in their jobs. This week, Indiana Public Broadcasting's Justin Hicks profiles Jamie Beck, a housekeeper at IU Health Ball Memorial Hospital in Muncie. 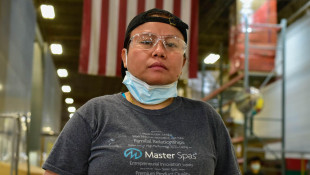 For the month of September, we're bringing you stories of workers across Indiana, about what they do and how they find meaning in their jobs. This week, Indiana Public Broadcasting's Justin Hicks profiles Ciin Mang. She's a refugee from Myanmar and was recently promoted to production line manager at Master Spas in Fort Wayne.