This story was updated.

Three new members were approved by voters Tueday to join the Indianapolis Public Schools Board in January. The incoming commissioners to the seven-member board ahve been critical of the district’s plan to merge and close schools and change grade configurations, and IPS’ partnerships with charter schools.

Hope Hampton won with nearly 56 percent of the District 3 vote, the sole contested IPS race, based on unofficial results from the Marion County Election Board. That seat covers the Northside, from Mapleton Fall Creek through Broad Ripple and a portion on the Eastside to Forest Manor.

“​​For me, this is a full circle moment,” said Hampton, the owner of the local interior design company Cozy. “​​I come from a family who didn't vote. And so for me to even be in a race and I've been voting since I was 18 years old and to now submit my own name to advance the cause of kids that I've been caring for for over three decades is huge.”

Phair, in a statement Wednesday, said she was proud of the work her team put in for the campaign.

"I’m looking forward to how our new board members will work in partnership with the communities, families, and teachers of IPS to provide high quality education for our students," she said.

The other winners are Nicole Carey for District 5 and Angelia Moore for the at-large seat. Both races were uncontested. The Marion County Election Board is expected to certify results by Nov. 21.

The race to lead Indiana’s largest school district is typically a heated battle. But some community members were dissuaded from running this year because they didn’t have the financial contributions needed to win.

Hampton raised around $85,100, according to pre-election campaign finance reports. The majority came from a single political action committee. Phair raised about $12,600.

An analysis by WFYI and Chalkbeat Indiana found 14 out of the 17 IPS candidates who raised more money than their opponent over the past decade, won a seat on the Indianapolis board.

Before the election results were released Tuesday, District 3 candidate Kristen Phair, a parent of three IPS students, said this election was important to her because she’s invested in taking care of teachers so they can support students.

“I have been volunteering in the schools for the last year and seeing how our teachers are rising to the occasion of educating our students in a post-COVID world where our teachers are also often under-resourced and we have major staffing shortages,” said Phair outside a polling site.

Now the winners are expected to oversee IPS’ controversial proposed “Rebuilding Stronger” initiative to overhaul the district by closing and merging buildings and changing grade configurations in an attempt to boost academic performance while also reallocating its budget.

Meet the new board members

District 5, parts of Downtown and the Near Northside.

Carey is the founder of two local businesses: Anda Spanish, an early childhood language acquisition company; and she serves as the chief executive officer of Indy Equity Collaborative, a consulting firm that offers diversity, equity, and inclusion support to schools. Her race was uncontested, but Carey raised over $9,000.

Carey said she’s honored to be a school board member and she plans to focus on building relationships with community members over the next two months.

“I'm really trying to learn from the community of things that have worked well and haven't worked well with representatives in the past,” said Carey. “I think that's my number one goal. But also to work with current commissioners to see if there are ways that we can get some mentoring in the next couple of weeks, and so that transition of becoming a board member is a little bit smoother.”

Moore is the deputy director of the Fay Biccard Glick Community Center. She previously worked for IPS as the senior coordinator in portfolio management — the office that oversees charter schools in the district. Her race was uncontested, but Moore raised over $3,000.

“I think it's time for us to put students first,” said Moore. “Make sure that our students are heard and that the parents get to choose to make choices that are best for their students, and we put that focus back. We know that our students of color still have a lot of work to do for that achievement gap and making sure that we're focusing on that first, and then letting the adult things happen outside of that.”

Tags:2022 budget2022 School Elections2022 election
Support independent journalism today. You rely on WFYI to stay informed, and we depend on you to make our work possible. Donate to power our nonprofit reporting today. Give now. 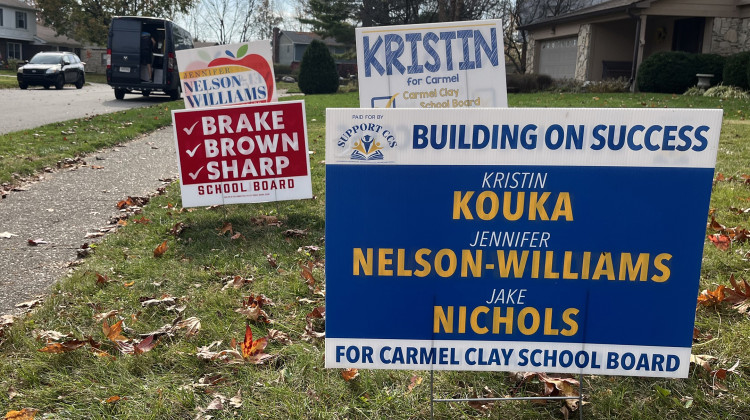