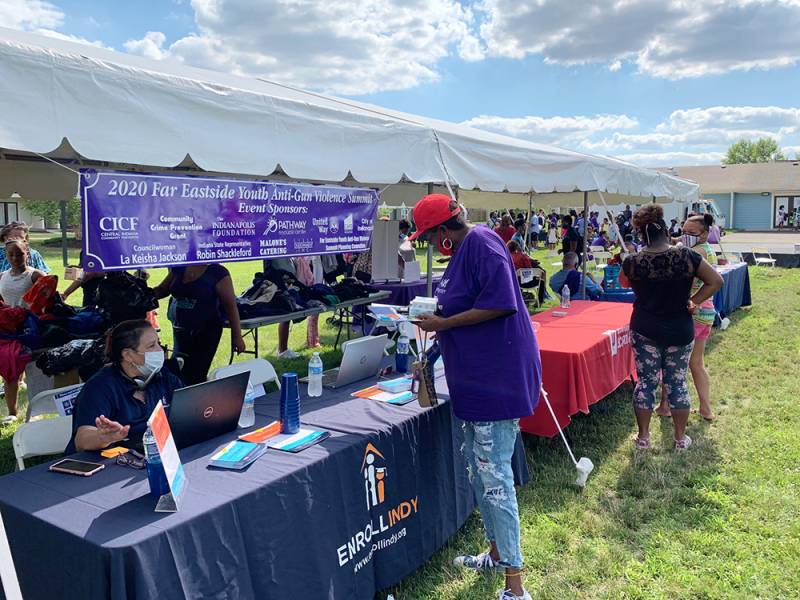 It’s a sunny, warm, summer afternoon at the Amber Woods apartment complex on Indianapolis’s Far Eastside. About 100 community members, residents, city and state leaders and young people gather in a revitalized community greenspace.  A DJ is getting ready.  A caterer is setting up on folding tables under a tent.

La Keisha Jackson (D) is this district’s city-county councilor, and she leads a graduation ceremony for 18 teenagers.

Tania Green is one of the teens graduating from the program. She says she learned more about how to communicate with peers at risk of using or being hurt by gun violence because they are influenced by poverty and trauma.

“Basically, I say they should, like, help around a community and stuff, to be more involved around the situation that goes on around here,” Green says.

This event is also a place where people can find more ways to do that, it is a gun violence summit. There’s also a clothes giveaway and information booths including resource groups, employment companies and mental health organizations. 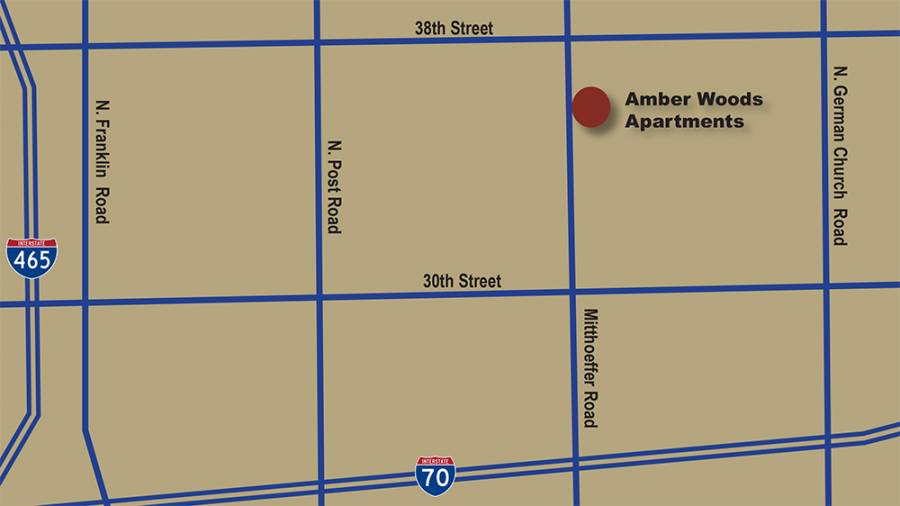 Indianapolis’s Far Eastside has dealt with years of social disadvantage. Now the pandemic magnifies those inequities, and all of that can fuel violent crime.

Young black men on the far eastside are far more likely to die by a gun than most residents. The neighborhood has one of the highest gun violence rates in the city.

Increasingly, more people agree human investment programs reduce violent crime because they give people the ability to become self-sufficient. That can mean increasing affordable quality child care options, improving housing and rental options for residents, and investing in programs -- like Pathway -- that seek to steer youth toward positive choices.

The Amber Woods apartment complex, the location of the summer Pathway graduation, is another example of human investment. The City invested $25 million to refurbish units, exteriors and add outside amenities, and the final product is exactly the type of safe, affordable housing option many are working for, to provide more equity.

After the graduation ceremony, Jackson finishes up hosting duties and mingles. She says, while the pandemic brought more private and public money in for human investment, the city still needs to do more.

“For a city of our size, we should be investing more dollar-wise in programming and in that human investment,” Jackson says, “and we're not there yet.”

This year Jackson and other city-county councilors will grant more money for community-based crime prevention efforts. Historically, the City-County Council gave its districts equal amounts of crime prevention money, no matter the difference in need, but that recently changed.

In each budget, the City-County Council allocates money for specific crime prevention programs - like re-entry job opportunities and youth mentoring efforts. Historically, all 25 districts received the same amount of money.

A new proposal adopted by the City-County Council changes that to distribute the violence reduction grant dollars based on each specific district’s needs. This year the pot of money is $1.25 million and will give districts that have a higher crime rate, like Jackson’s on the Far Eastside, a higher percentage of that money. District 14 is among five across the city that will receive $80,000.

Democrat Leroy Robinson is the councilor for District 1, on the northwest side, has a lower crime rate and will receive $35,000. Robinson chairs the Public Safety and Criminal Justice Committee and said it makes sense to distribute the money equitably, not equally.

“First time we've ever done it in the history of our city,” Robinson said. “We've never allocated funds in this manner on a district level.” 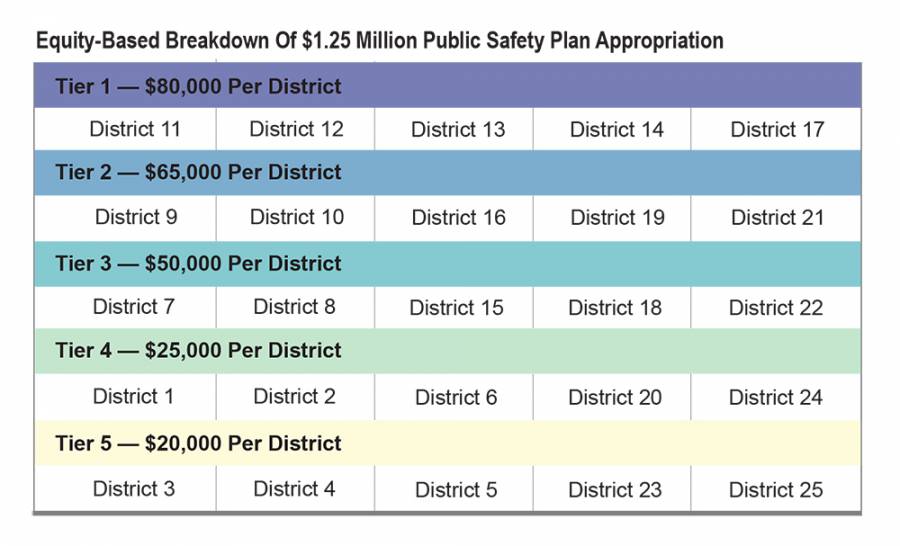 The distribution was determined using disadvantage rates charted by SAVI, at IUPUI’s Polis Center, and with the help of the Central Indiana Community Foundation. The council enlisted SAVI to correlate the violent crime rates and social indicators, like poverty, that influence crime. District 14 has the fifth highest violent crime score, at 83. The lowest violent crime score is 0, for District 25 on the far southeast side of the county.

Jeremy Townsley, a visiting researcher with the center and a sociologist, said it’s difficult for many to see the cause and effect relationship between well-being and criminal behavior because of our culture of individualism.

“In our culture, we tend to think crime is about individual people making their own choices,” Townsley said. “But as a sociologist, we think about social structures and social processes. And there are always these antecedents to any of our behavior.”

District 14, for example, has a 28 percent poverty rate and a quarter of its households are single family. The data also gives neighborhoods a segregation score -- here it's 81, the highest would be 100.

Polis Center Associate Director Sharon Kandris said Indianapolis faces challenges when it comes to reaching areas that have been left behind.

“We kind of get siloed as organizations, as funders, as government,” Kandris said. “Having a coordinated community effort is really what needs to be taken here.” 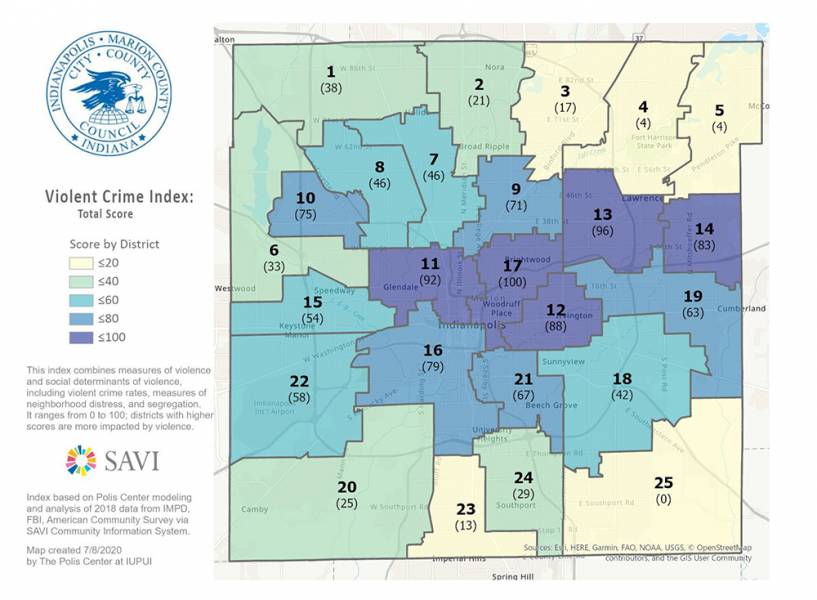 Success comes through changes in social situations that influence quality of life and the factors that determine well-being: a stable family life, access to early education, healthy food, good jobs, a safe community. Those changes can be hard to measure, but the Far Eastside can point to some wins in recent years.

“A lot of these organizations have kind of revamped and started putting in the time and the love that it takes to support a community that deals with the trauma and the lack of resources that the Far Eastside does,” Winkel said.

Community groups helped increase access to quality child care, a key part of family success. SAVI data reports all Far Eastside families with children under five years old now live within a mile of a Path to Quality Pre-K program that rates in the highest two levels, 3 and 4.  All families may not be able to enroll in these programs, because of cost or space, but access did grow 25 percent in 6 years. 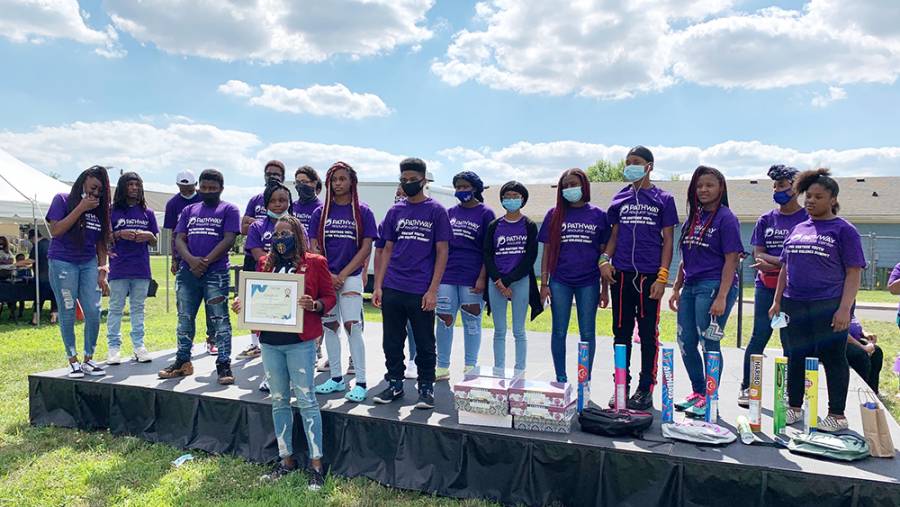 Another needed resource is more safe, affordable housing. The city-supported, $25 million rehab of the Amber Woods apartment complex -- the location of the gun violence summit -- included new exteriors, playgrounds, fresh paint and appliances in the units.

Councilwoman LaKeisha Jackson says the public financial investment is critical but that it will take more from everyone in the community.

“You talk about the village raising a child, but a village of community collaborators and partners who understand the need and are willing to come grassroots,” Jackson said.

At the revitalized Amber Woods greenspace, the mood at the summer Pathway graduation is turning celebratory. Some are starting to dance, others sit down with plates full of food.

The Community Alliance of the Far Eastside, or CAFE, has a booth set up. Its services include food distribution, legal assistance and workforce development. Cheria Caldwell is its community engagement director and says more people need help during the pandemic, and much of the focus is back on the basics: food, rent and utility help.

“The number has increased significantly due to COVID,” Caldwell says. “So, just within like the last five months or so, we've been able to service over like 4,000 clients.”

Luvenia Hudson sits off to the side of the activities and watches. A friend brings her a plate.

She’s a Pathway board member and has been a leader in the Far Eastside community since she moved to this apartment complex in the 1980’s.

“I tried to strive to make things better for low income people in Amber Woods and then extended to the whole Far Eastside,” Hudson says.

Still, Hudson is grieving this summer day at the gun violence summit. Her son, 46-year old Ronald Morris, was shot and killed right around the corner from this apartment complex a few weeks ago.

“I felt compelled to attend the rally today, not only to support the young people who are graduating,” Hudson says, “but also for the violence rally.”

She says stemming gun violence starts with the youth.

“We got to start young with them and teach them the right way, respect their elders, and it'll make a change if we can just do it,” Hudson says. “Gotta get enough interested people who are interested in their community and the surroundings, and we can do it.”

Tags:IndianapolisRacial equityviolent crimepovertyfar eastside
Support independent journalism today. You rely on WFYI to stay informed, and we depend on you to make our work possible. Donate to power our nonprofit reporting today. Give now.