How One Indianapolis Woman Became A Force For Healthy Food

Sharrona Moore learned at an early age growing food doesn’t have to be difficult. As a child she spent weeks in the summer on a great uncle’s farm discovering the joy of gardening and eating vegetables straight from the fields.

In the years since, Moore, 44, has grown her own herbs or vegetables on her patio or in her yard in Lawrence, in the Indianapolis metro area. Most recently, she’s turned her gardening prowess to a project to help her far east side Indianapolis neighborhood.

Moore, a barber and a comedian, discovered she had another dream. She wanted to start a community garden to help meet the fresh food needs of the people in her neighborhood. With training from Purdue University’s Urban Agriculture Certificate program she learned how to multiply her growing capacity, to scale up from backyard gardener to food producer.

Now, with the help of community volunteers and local company Monarch Beverage, Moore has spearheaded the creation of an operation, roughly the size of two football fields, providing healthy fruits and vegetables to her neighbors in need.

When a stretched budget isn’t enough...

Moore’s far east side Indianapolis neighborhood is a food desert. There are no traditional grocery stores within miles of some homes, but fast food, gas stations and liquor stores abound.

Moore says she sees kids buying chips and sweet drinks at the gas station before and after school.

“They’re getting that and then they’re going home. So they’re not getting a quality meal on a day-to-day basis,” Moore says.

Over one-third of the people in the neighborhood live in poverty. That, combined with a lack of healthy food options, has serious public health implications. According to the Gallup-Healthways Well-Being Index, Americans living in poverty are more likely to suffer from chronic health problems.

Moore understands what it means to not have enough money for food. Her younger brother Otto Breedlove, who has Crohn’s disease and schizophrenia, receives $180 a month in Supplemental Nutritional Assistance Program benefits — otherwise known as SNAP or food stamps. Breedlove, 42, lives alone, but Moore makes sure he gets to the grocery store and helps him stretch his money each month. Sometimes he still doesn’t have enough.

Her brother’s situation was one motivation for Moore to begin her garden project. She says she was frustrated by what seemed like a sometimes demeaning experience at the food pantries, where recipients had to prove their income each month to receive food.

In December 2016, Moore set up a meeting with Phil Terry, the CEO of Monarch Beverage Company, an Indianapolis-based beer and wine distributor. Moore knew from driving by the company’s property that Monarch had plenty of vacant acres in which to establish a community garden.

Terry remembers the meeting with a smile.

“Sharrona comes in, and she’s very prepared,” Terry remembers. “She’s got data about the need for healthy food in this community — and how with cooperation from us and others in the community, she could take some of this land we’re not using and turn it into something meaningful.”

Terry calls the meeting “zen-like.” He says Moore’s request fits perfectly with the wellness culture that Monarch is working to establish (the company has an on-campus medical clinic and gym equipped with personal trainers).

Terry says the company had been thinking about breaking ground on a Monarch Beverage community garden, but it hadn’t materialized. So when Moore came in with a plan, it was easy to say yes.

With that partnership, Lawrence Community Gardens was established.

Initially, Monarch provided two acres along 46th Street, just east of Post Road, for the garden, and there are several more acres available for it to expand. This spring, Moore and her team removed the sod and worked organic compost into the dirt to prepare for planting.

Moore and Monarch are also partnering with the City of Lawrence to get a water line established to the garden site and help with other issues. And Indianapolis-based health provider Community Health Network, which sponsors a mobile food truck, has expressed interest in partnering with Lawrence Community Gardens and other citizen-led food initiatives.

Volunteers have helped each step of the way, including Monarch employees to neighborhood residents to kids and teens from the Fay Biccard Glick Neighborhood Center at Crooked Creek, mowing, tilling, planting and weeding.

Some of the first produce from the garden made its way to the Community Cupboard of Lawrence, a food bank that serves 1,200 Lawrence Township families per month. Coordinator Molly Mattacks says people love the fresh produce, tomatoes, lettuce, cucumbers.

“I know there was tomatoes because everybody’s been wanting tomatoes, and she was the first one to bring us those,” Mattocks says.

This year’s wet weather has been a challenge, but Moore is growing two acres of fruits and vegetables, including broccoli, okra and watermelons. She’s about to plant late season crops — cabbage, turnip greens, collards, kale and garlic and mustard greens. When it’s ready, some of it will be sold at the new Lawrence Community Garden mobile food stand, which made its debut earlier this month.

Moore says half the yield will be given away.

“The rest of what we grow here is going to be sold here on-site at a farm stand, so that we can have affordable access to farmer’s market-style food for our community,” Moore says.

The garden accepts SNAP benefits - and they also have a free “you-pick” section. Moore does not ask people to verify where they live and how much money they make, requirements in some food pantries.

“I want to give people a more dignified food experience. No paperwork involved,” Moore says. “We just want your name and we weigh the food so we know how much we’re giving out to the community.”

So far this year, Lawrence Community Gardens has donated 1,200 pounds of produce to Indianapolis food pantries.

Moore’s goal in this inaugural year? Grow 20,000 pounds of food.

This story was produced through a partnership with WFYI Indianapolis and Side Effects Public Media, a reporting collaborative focused on public health. 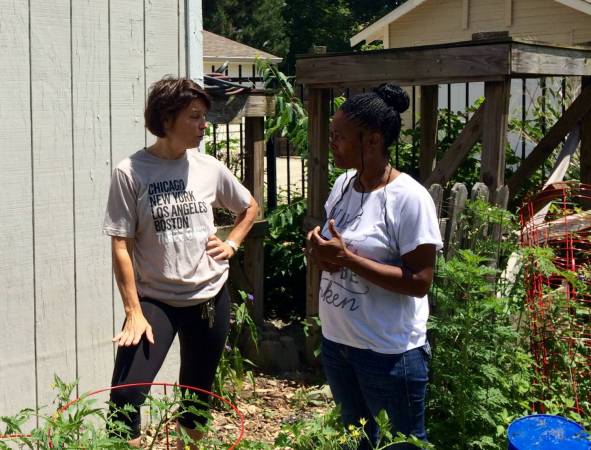 Tags:food desertLawrence Community Gardenscommunity gardenMonarch BeverageSharrona Moore
Support independent journalism today. You rely on WFYI to stay informed, and we depend on you to make our work possible. Donate to power our nonprofit reporting today. Give now. 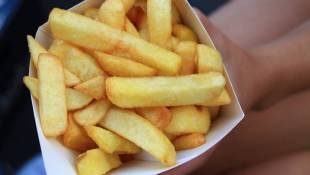 A number of studies have shown people who live close to fast food restaurants have a higher BMI but new data indicates that's not necessarily true.