Hundreds of residents from various religious backgrounds gathered in a Carmel synagogue Monday night, two days after it was vandalized with Nazi imagery, in a show of solidarity and support.

Pierre Atlas is a member of the synagogue, called Congregation Shaarey Tefilla, and teaches political science at Marian University.

“I think we were a little surprised that it would happen in Carmel," Atlas says. "On the other hand, I think that shows that it could happen anywhere. This type of hatred against Jews, anti-Semitism, but also this sort of bigotry against minorities.”

Atlas says the widespread impact of bigotry was made evident by the variety of groups that spoke at the event, and noted their own experiences – groups like the Muslim Alliance of Indiana, the Hindu Temple of Central Indiana, the Indianapolis Urban League and IndyPride.

Shaarey Tefilla Rabbi Benjamin Sendrow says the graffiti was an act of evil, and says everyone who came to the gathering was there "to fight evil."

Sendrow says he was not surprised by the love their congregation received, but says he was overwhelmed by the sheer volume of people who came to show support.

“An act that intended to express hatred, and probably they hoped to evoke some fear, triggered an outpouring of love and support that wipes away their action better than bleach and fresh paint,” Sendrow says.

A number of speakers at the gathering, including one from the Anti-Defamation League, urged Indiana lawmakers to pass a hate crime bill that would bring harsher sentencing to similar crimes – Indiana is one of five states without one. Gov. Eric Holcomb announced he supports the idea hours before the event.

Carmel Mayor Jim Brainard spoke about the spread of Nazism in 1930’s Germany, noting it happened in a modernized country.

Brainard asked members of the community to fly the American flag as a sign of repudiation, “because it’s a symbol of religious freedom.”

Tony Mason, president of the Indianapolis Urban League, told the crowd not to be silent about bias crimes.

“Definitely fly your flags,” Mason said. "But I encourage you also to raise your voice and join this fight."

Police say they are still investigating the incident, and looking for suspects.

Tags:Congregation Shaarey TefillasynagogueNazi graffitiCarmelhate crime
Support independent journalism today. You rely on WFYI to stay informed, and we depend on you to make our work possible. Donate to power our nonprofit reporting today. Give now. 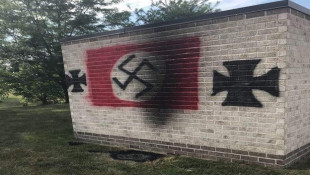 Congregation Shaarey Tefilla in Carmel says the vandalism was done early Saturday to the bricks making up a shed for the synagogue's garbage container. 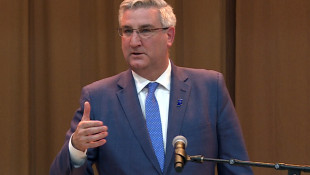 Legislation to increase penalties for crimes committed because of a victim's characteristics - such as race, religion, and gender identity - failed for years. But now Holcomb says he'll work to find consensus on the issue ahead of the 2019 session.