A huge landscape sculpture will make its official debut Friday during a public Block Party at the Indianapolis Museum of Art.

Five Brushstrokes is the work of American pop-artist Roy Lichtenstein.  It was commissioned in the early 1980s, but it was never built because it was too big and too expensive -- so it remained a design only.

Lichtenstein died in 1997 and a foundation named after him funded the fabrication of Five Brushstrokes in 2012, the IMA acquired it with the help of private funding.  It consists of five separate sculptures, the largest of which stands 40 feet tall.

The piece is now installed on the IMA’s front lawn.  It provides a colorful backdrop for Robert Indiana’s famous Love sculpture.  Scott Stulen, the new curator of audience experience and performance, says the IMA is gaining a reputation for its collection of outdoor art.

"This is another addition to that and I hope that we can continue to get that reputation out there," says Stulen. "I think this is a key piece by a key artist and something that is pretty visually stunning."

Stulen is also responsible for planning the Block Party celebrating the new exhibit.

"We’re just kind of starting to ramp up these new programs," says Stulen, "and hoping that people really embrace the IMA as a place to not just come once a year to see one exhibition, but a place that they're going to want to come many time over the course of a year because we’re going to be changing it up constantly."

Visitors can play artistic lawn games, contribute to a giant community painting or join a drawing club.  Friday’s celebration starts at 2 p.m. and is free to the public. 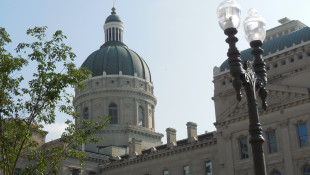 Hoosiers still waiting on paper checks for their $125 automatic taxpayer refund should start to receive them next week.