In State Of The City Address, Hogsett Pitches Overhaul For Infrastructure Funding 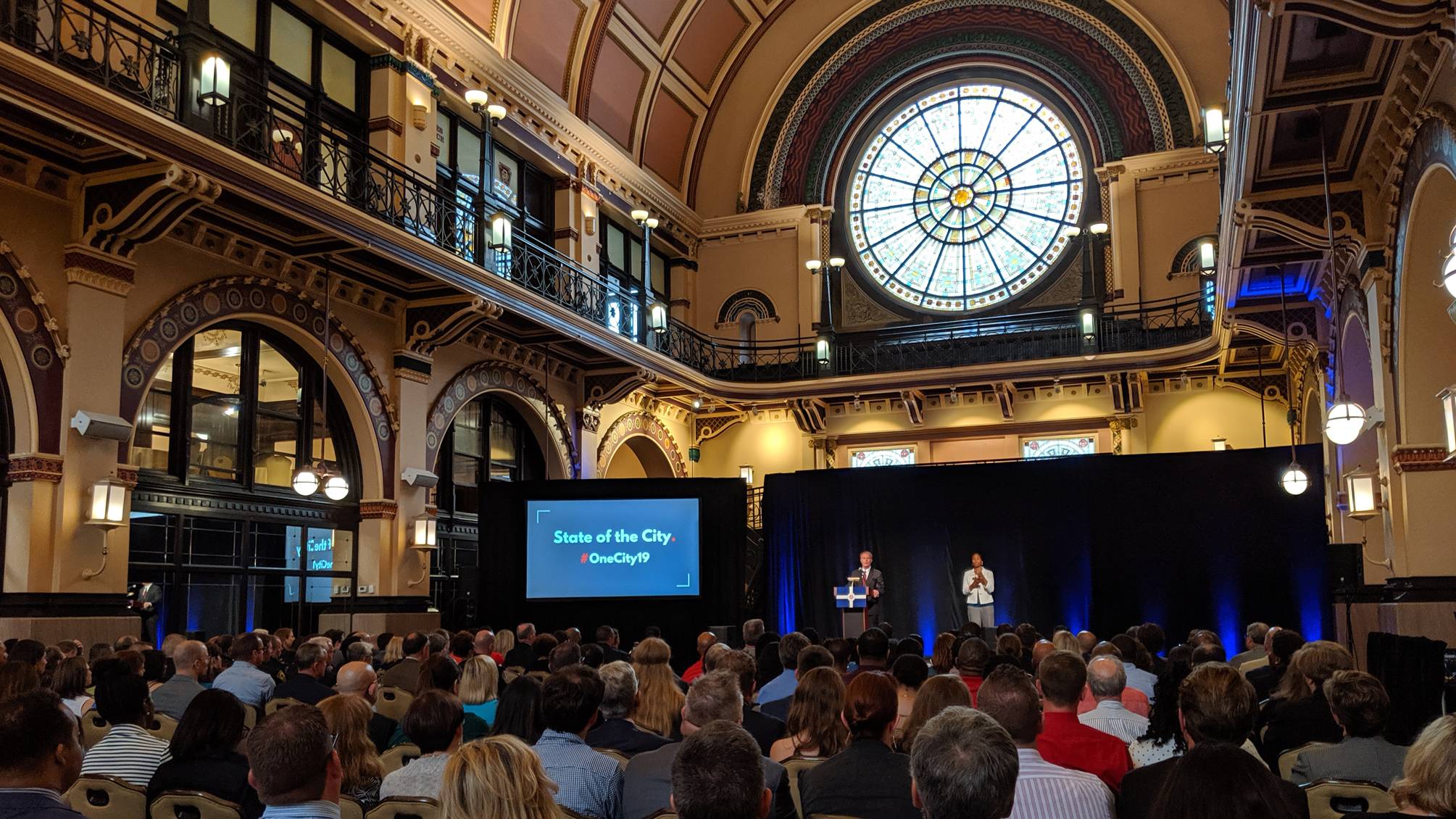 Mayor Hogsett says he hopes other communities craft proposals for infrastructure funding reform, and that the pitch from Indianapolis kicks off a region-wide conversation to find the best solution. (Drew Daudelin/WFYI)

Indianapolis Mayor Joe Hogsett delivered the final State of the City address of his first term Wednesday night, speaking to a crowd in Union Station’s Grand Hall. During his speech the mayor announced a proposal to address long-standing infrastructure issues in the city.

Deteriorating roads, bridges and sidewalks have become a focal point for Indianapolis politicians in recent years, and a major component of election campaigns from both parties. There is bipartisan consensus that city administrations have underspent on infrastructure for decades, but conversations about long-term solutions to the problem, at least publically, seem to have stalled.

Current city officials say that in 2023, after the extra money from its four-year plan is used up, infrastructure funding for Marion County will plummet to about 1/4 of what it needs to reverse deterioration and reach fair conditions.

The Hogsett administration’s proposal is an attempt to get ahead of this decline, and simultaneously aims to address funding issues long term. The proposal is all about distribution – instead of seeking to bring in more revenue through federal programs or tax increases, the proposal focuses on changing the way income tax revenue is distributed to counties in the region.

"The infrastructure in this city has served as a critical hub for the transport of goods, ideas, and these days, commuters," Hogsett says. "It's not a boast. It's a statement of fact. Indianapolis is the economic engine for our region and for our state. As a result, more than 160,000 commuters drive into our city every day."

A lot of people commute to the city, go to work, then drive home to a neighboring county. That means the income tax revenue they earn in Marion County goes somewhere else, and leaves some of the most-used roads in the region with less money to maintain them.

To illustrate the consequence of this system, Indianapolis officials point out that while Marion County contributes 66% of the region’s income taxes, the county only collects 39% of the revenue.

"Marion County taxpayers bear the brunt of the financial burden for infrastructure which serves the entire region," Hogsett says.

Hogsett’s proposal is designed to help correct these disparities. In the new model, nine counties in Central Indiana would contribute a small fraction of their future income tax growth to a regional fund. That fund would then be distributed based on one important metric – how much each county's roads are being used. This number is referred to as ‘vehicle miles traveled,’ or VMT.

City officials argue this is a more equitable way to calculate infrastructure funding, and would push needed money to the most heavily used, run-down roads in the region. And the distribution model is designed to change along with shifting job and transportation trends.

Right now, it would result in five of the nine counties seeing an increase in funding, with Marion County getting the largest boost.

"The truth is, after decades of underfunding, it is abundantly clear that any solution for Marion County's infrastructure problems must include help from all who routinely use that infrastructure," Hogsett says.

City leaders make it clear that this remains an idea. To gain traction, officials say, buy-in from leaders in the surrounding counties will be crucial. And the General Assembly would ultimately need to pass legislation for a regional model to be implemented.

Hogsett says he hopes other community leaders craft proposals for infrastructure funding reform, and that the pitch from Indianapolis kicks off a region-wide conversation to find the best solution.

During his State of the City speech the mayor also announced that a $1.3 million grant from the state will help expand MCAT – a program that pairs mental health professionals with police officers to guide some into treatment programs.

The city considers MCAT part of its larger push for criminal justice reform. Hogsett says during its pilot phase the city saw a 67% increase in referrals to the program.

“To put it plainly, more than 1,200 incidents where we have started folks on routes to recovery, rather than jail,” Hogsett says.

City officials say the grant money will allow MCAT, which currently operates in five of IMPD's six districts, to cover the entire city.

Hogsett focused on a few other key issues in his address. While discussing public safety he attributed some short-term drops in crime to a number of efforts from the city, including a return to beat policing and the appointment of a Director of Community Violence Reduction.

He also highlighted programs from local groups and the city that help young people and underserved populations connect with job opportunities.

Tags:infrastructureJoe HogsettState of the City addressIndianapolisfundingincome taxroads
Support independent journalism today. You rely on WFYI to stay informed, and we depend on you to make our work possible. Donate to power our nonprofit reporting today. Give now.