Republicans representing Indiana in Congress say they listened to Hoosiers before voting in favor of the GOP tax overhaul this week.

A previous version of the tax reform measure would have classified the tuition waivers students receive for research and teaching classes as taxable income, costing the average graduate student between $11,000 and $40,000.

For the last few weeks, students have been lobbying lawmakers to remove that provision, and at least two of Indiana’s Congressional delegation say they listened.

In a video statement released after the Senate vote early Wednesday, Republican Sen. Todd Young says this version of the bill continues support for what he calls “Hoosier priorities.”

“Among those priorities, deductions for contributions to benefit our charitable organizations, [and ] keeping tuition waivers for graduate students un-taxed, so that Hoosiers are equipped to thrive in this ever-changing economy,” Young says.

Rep. Trey Hollingsworth (R-9th District) also points to the tuition waiver as a victory in the GOP measure.

A media representative said in a statement that Hollingsworth talked with both students and Indiana University President Michael McRobbie about this part of the bill.

“Trey was pleased to be able to share this good news with IU, given that President McRobbie, along with his D.C. staff, was in regular communication with our office on the importance of maintaining these provisions,” said Communications Director Katie Webster in an email.

“In recent days, many of you expressed your deep concerns over the most harmful provisions in the proposed tax reform legislation, and your voices were heard,” McRobbie said in a statement. “In the days and weeks ahead, we will continue to closely monitor other provisions in the tax reform bill that may impact IU, our students and our staff, and we look forward to having the opportunity to continue to discuss the implications of the new law with our government representatives, partnering academic societies and peer institutions.”

The approved tax plan also leaves out another controversial measure – an earlier version would have taxed the tuition waivers offered to university employees and their families as a benefit of employment.

Tags:Todd YoungMichael McRobbieTrey Hollingsworthtax reformtuition wavers
Support independent journalism today. You rely on WFYI to stay informed, and we depend on you to make our work possible. Donate to power our nonprofit reporting today. Give now. 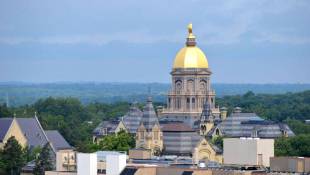 Notre Dame estimates it could lose between $8 million to $10 million per year due to changes included in the federal tax reform bill approved by Congress Wednesday.