To most people, this summer's 50th anniversary of Neil Armstrong's historic walk on the moon was cause for celebration. But for many researchers in Indiana, it's also a unique moment to help drive the future of space exploration.

Hundreds of people stand silently in Purdue University’s Armstrong Hall of Engineering in mid-July. They’re listening to a recording of the audio communication between NASA Mission Control and Apollo 11 landing on the moon.

Cheering erupts and air cannons go off marking the exact moment Armstrong and Buzz Aldrin landed on the moon 50 years ago.

While this moment celebrates the past, associate professor David Spencer says Purdue wants to use the momentum of this anniversary to build the future. It hopes to help create an aerospace hub here in the Midwest.

“We have such great mission design and propulsion capability; system engineering capability, we want to harness that and have Purdue be a hub for entrepreneurial development in the space arena,” says Spencer.

The university is already working with NASA and private companies on developing aerospace technology, an industry estimated to generate $350 billion per year. NASA expects that number to go into the trillions over the next 30 years.

“There’s a lot going on in the state, it doesn’t get advertised a lot, but if you think about Indiana’s manufacturing capabilities, and its legacy, its low cost of living, its ability to attract intellectual capital through the university systems; it has a lot of potential,” Dumbacher says.

In southern Indiana just a few miles from Louisville, one small company is already making waves in space research and development. Pulling up to Techshot, it looks like a standard concrete office building, but walk through the doors and you see high-tech labs including an area where employees regularly communicate with astronauts on the International Space Station.

“She is making a new label for a part of this box that the mouse goes in to go inside our payload. And you can see our logo again; and very exciting seeing our logo up in space,” says Rich Boling, vice president of corporate advancement.

He’s showing a video clip from a previous experiment using a bone density scanner on mice in space and explaining the functions of the company’s Payload Operations Control Center.

“She’ll turn and hold it up to the camera and the person in this chair is the one talking to her,” he says.

Techshot’s most recent research aims to transform health care by printing organ tissue - and eventually complete organs – in space. Something it can’t do on earth because gravity gets in the way. He says nearly two dozen people needing organ transplants die every day.

“Those 22 people a day that die waiting on the organ transplant list; we don’t want to have to have a situation where someone has to die to be able to save someone else. If we could take your own tissue and provide a new organ that doesn’t require anti-rejection drugs, which has its own consequences,” says Boling.

With the company’s success, Boling says Techshot has run out of space in its current facility. It’s looking for a larger building that can accommodate the growth.

Back on Purdue’s campus, officials are also planning for the next 50 years of space research. Hoping to build on the Apollo anniversary, the campus established a new project. The Cislunar Initiative will create an infrastructure for the area in space between the Earth and the moon. The goal is to spur economic growth in orbit similar to what the interstate highway system did in the U.S.

Purdue’s David Spencer says the new project will open the door to even more aerospace investment in the state.

“And what we’re hoping to do is develop an entrepreneurial hub so that businesses, small businesses, startups, can come here, work with us, develop technologies, work with the established industry players as well, and we hope that builds and ecosystem that’s centered here in Indiana,” says Spencer.

Dan Dumbacher, with the American Institute of Aeronautics and Astronautics, says this may be the right moment for Purdue and Indiana companies to do it. The entire aerospace industry, he says, is growing.

“In the course of my 35 year plus career, most of that with NASA, never have I seen the level of excitement in the general population as we have seen it today,” says Dumbacher.

Tags:aerospaceNASAApollo 11Purdue Universitymanufacturing
Support independent journalism today. You rely on WFYI to stay informed, and we depend on you to make our work possible. Donate to power our nonprofit reporting today. Give now. 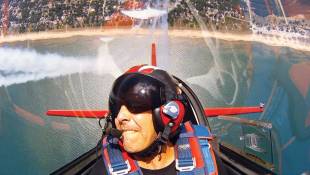 It may be as simple as a Styrofoam plate fashioned as a glider, or as sophisticated as the Space Shuttle. But aircraft of all sorts offer endless fascination to both children and adults.

WFYI and The Children's Museum of Indianapolis partnered...