WEST LAFAYETTE -- Craft beer now makes up a quarter of the beer market in the U.S., which means brewers are eager for ways to stand out. For some, that means buying hops locally -- even in Indiana.

It's encouraging more and more upstart Hoosier growers to invest long-term in the trendy crop.

Steve Howe is one of them. His Crown Point backyard doubles as Howe Farms. Past a pen of piglets and fluffy Scottish Highland cows, Howe is growing a tiny forest of hops.

Their vines stretch almost 20 feet into the air, wound around strings that hang in rows from cables. Those are stretched between wooden posts dug into the tilled earth.

"When you walk through, you can see it's starting to wall up," Howe said, pointing out how the healthiest hop plants will grow into a thick curtain. "You have walls of green, basically."

Howe put up these trellises, but he's not a farmer by trade -- he's a social studies teacher. And he's one of a number of Hoosiers trying to transition to hops farming as a full-time job.

These plants at Howe Farms are two years old, and only just starting to sprout the fluffy hop flowers used to brew beer -- they look kind of like little green pinecones.

Howe plucked one off the vine and split it open between his fingers to reveal the yellow, pollin-like resin, called lupulin, that gives beer its flavor.

Hops grow like weeds, but in Indiana's humidity, they're also prone to mildew. That's one reason the state only has about 50 acres of hops, compared to 1,200 in Michigan and more than 50,000 nationwide.

There's also not much research on which hops flourish in Indiana soil. But Howe said his buyers are pretty flexible -- "kind of like a chef being able to come and say, 'yeah, these tomatoes, this is what I want, right here.'

"My brewers come out, and they can do the same thing," he said.

When it comes to local hops, it's a seller's market. That's why Howe has invested $100,000 in his hops, with plans to expand or even go full-time if things work out.

Now, you don't have to invest quite that much to get started. But hops farming still requires some capital, according to Ryan Hammer. He owns Crazy Horse Hops in Henry County, east of Indianapolis.

"Fifteen- to eighteen-thousand dollars an acre -- that basically gets your plants in the ground and growing," Hammer said. "Doesn't necessarily get you a way to pick 'em or anything like that."

Hammer started out with a quarter-acre of hops. He's since expanded to 10, with plans to grow to 100 acres in the next few years with the help of a nearby grain farmer. They'll need to fundraise $3.8 million to make it happen.

Hammer and most growers like him don't have agricultural backgrounds. But he said he likes the hops business enough to quit his job at an Indianapolis TV station and farm full-time.

"You're growing these plants, you get down to the end of it and you have harvest and you deliver your product -- it's very much a tangible thing," he said. "I just love that."

Hammer thinks he's got at least 10 years before craft beer demand and therefore hop prices fall from their current highs -- enough time for more local growers to get into the game.

At least a hundred of them came out for a recent "hops field day," organized by Purdue University's Extension service, at Sugar Creek Hops in Boone County. The heat index was in the triple digits, but Mark and Debbie Vonderschmitt still came from Louisville to see the farm.

Mark is a computer programmer and homebrewer, wearing a shirt with "the periodic table of beer -- it's got all the different beer varieties on it," he said. "Everything from saissons to stouts and stuff."

The Vonderschmitts own a corn and soybean farm in Southern Indiana, where they say some fields are sitting empty -- making them perfect for some hops trellises.

"After you've planted your corn, you need to have something to drink," Mark said, joking.

He doesn't expect to make a fortune off the new crop, but said it will help sustain the family farm for the next generation.

"Small farms are not gonna be able to make it on corn and soybeans," said Purdue horticulture professor Lori Hoagland, who advises hops farmers for the school extension. "So diversifying into some of these more niche crops is gonna be important."

Plus, she said, local hops help get people in touch with their food system -- and with each other. Her roots are in the Pacific Northwest (that's hop country) and she said she's really excited multiple people in Indiana want to quit their day jobs to grow the crop full-time.

But that's a tall order, even for farmers who already own their own equipment -- like the big stationary harvester that Sugar Creek owner Spencer Gray fired up at the field day.

"So this was originally built in 1984, I believe. Operated in Germany up until four years ago," he said over the clanking of the machine. "When we received it, it was cut in half in the shipping container. You can see where we had to weld it back together."

The harvester performs a fairly simple task: you feed the vines in, it strips off the hops. Of course, you still have to cut down the vines.

"We're looking for some volunteers for harvest," Gray said to the crowd, earning a laugh. "So if you're willing to work really hard in this kind of weather, for hours… we get to talk hops all day!"

"If not, we may have to reduce production a little bit," he said. "But we want to keep it going as long as we can sustain it."

Either way, he is creating a breeding program to test and cultivate new varieties of wild hops. It'll mean even more local options for brewers -- hops not just grown, but created, in Indiana. 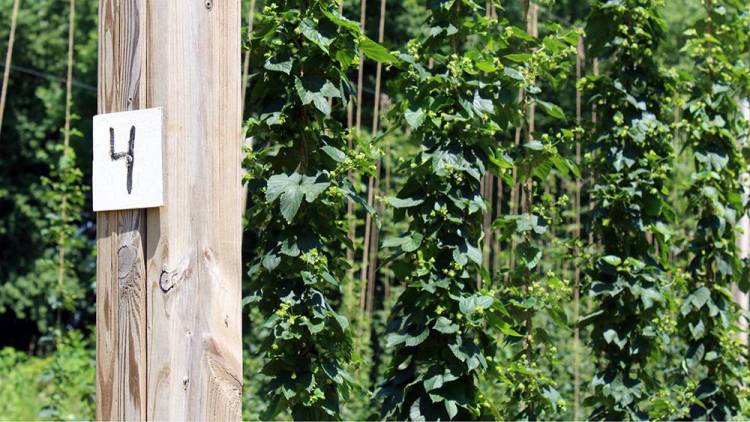 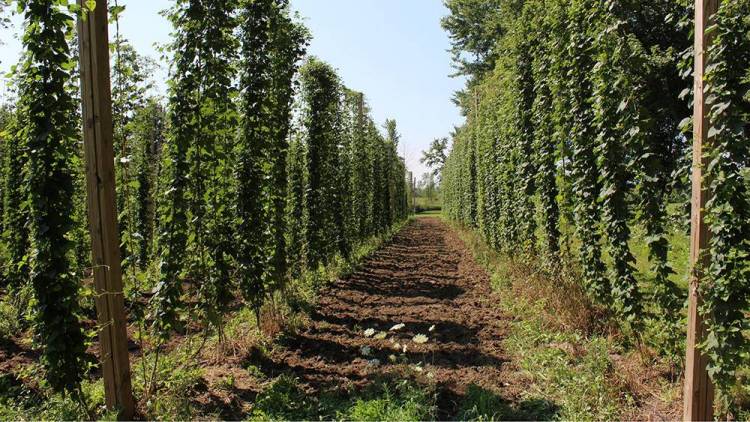 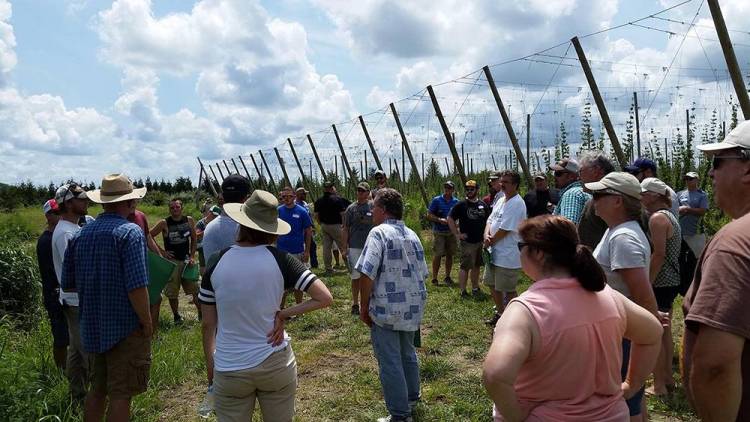 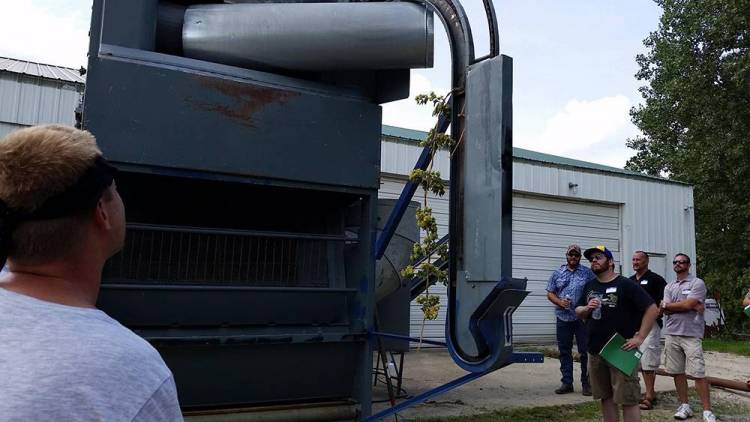 Tags:Purdue Extensionhopsbeerspecialty cropsAgriculturelocal food
Support independent journalism today. You rely on WFYI to stay informed, and we depend on you to make our work possible. Donate to power our nonprofit reporting today. Give now. 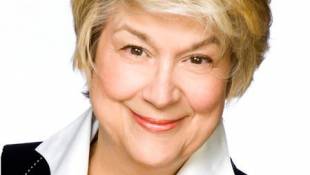 A weekly celebration of food and the roles it plays in our lives, "The Splendid Table" on 90.1 WFYI Public Radio is hosted by acclaimed food writer and cooking teacher Lynne Rossetto Kasper. The program explores the culture, the science,...