The Indiana House of Representatives will partner with the Salvation Army on a donation campaign during the new legislative session, which began Thursday.

House Speaker Brian Bosma says the partnership aims to increase awareness about child hunger, which affects one in five kids in the state.

“So the calculation is 68 hours for many of these kids," Bosma says. "Sixty-eight hours between their last meal on Friday at school and their first meal at school on Monday.”

Bob Webster, the Salvation Army’s Indiana Division commander, says he experienced food insecurity as a child and knows the impact it can have on young peoples’ lives.

"This really is a wonderful thing we’re all doing to make it possible for kids to be able to go home for the weekend and continue to study and do the things they need to do to have a productive lifestyle," Webster says. "When they don’t have to worry about eating or where their next meal is coming from it’s a lot easier to do the right thing.”

The goal for the donation drive is to bring in at least 400 backpacks and 10,000 food donations. People interested in donating to the drive can drop off donations at the Indiana Statehouse until March 5. 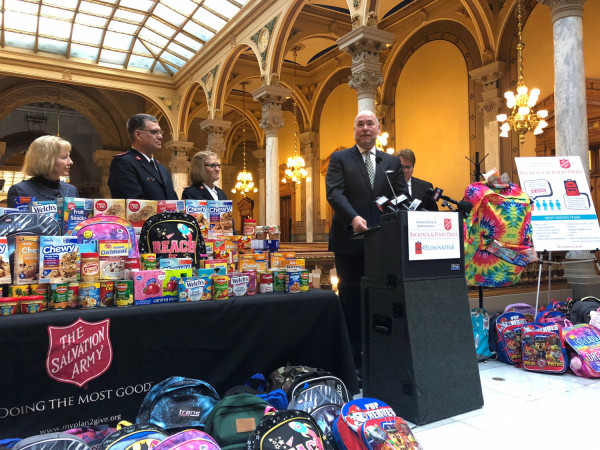 Tags:Salvation Armyfood insecuritychild hungerIndiana House of Representatives
Support independent journalism today. You rely on WFYI to stay informed, and we depend on you to make our work possible. Donate to power our nonprofit reporting today. Give now.