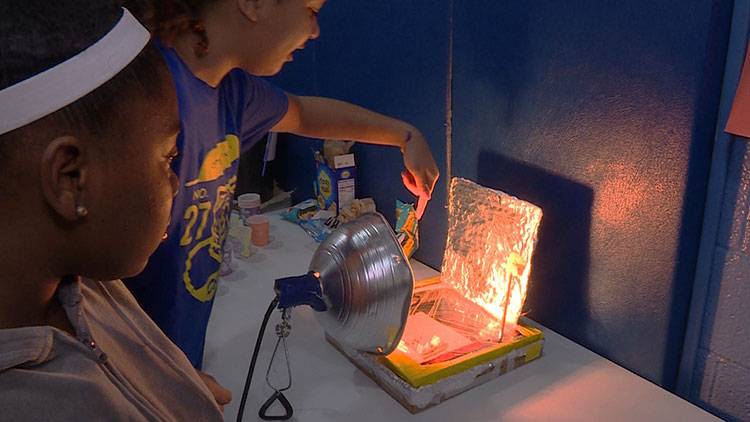 Seventh graders Tamyah Conner (left) and Bella Rollins (right) of Center for Inquiry School 27 in Indianapolis made a solar oven for the school's climate fair in March. (Rebecca Thiele/IPB News)

For many students in Indiana, eighth grade is the first and last time that they’ll focus on climate change in class. It's the only class required for all students that specifically talks about climate change in the Indiana education standards. Many high school students are encouraged to take courses that prepare them for college like chemistry and biology, instead of environmental science.

That puts a lot of pressure on eighth grade science teachers to teach the subject right. But many struggle to find current, reputable materials for their lesson plans.

In March, kids around the world skipped class to demand their leaders take action on climate change. But middle schoolers at Center for Inquiry School 27 in Indianapolis did something different. They set up a fair to teach younger kids about climate change and what they can do to help.

“It’s very important for younger kids to know that this could be their future and the world could be messed up if we don’t take a stand now," says seventh grader Warnaesha Jackson.

Lori Baker is her science teacher. Baker says she spends countless hours sifting through climate change info to make her lesson plans. So when she received a shiny, professional-looking booklet in the mail a few years ago, she was excited.

“And then I actually started flipping through and realized that’s certainly not what it was,” Baker says.

It was from the Heartland Institute, a conservative think tank that denies climate change is caused by people. Baker says she was frustrated.

“No one has ever reached out to me as a middle school science teacher, ever, to give me information about climate science — except the Heartland Institute,” she says. 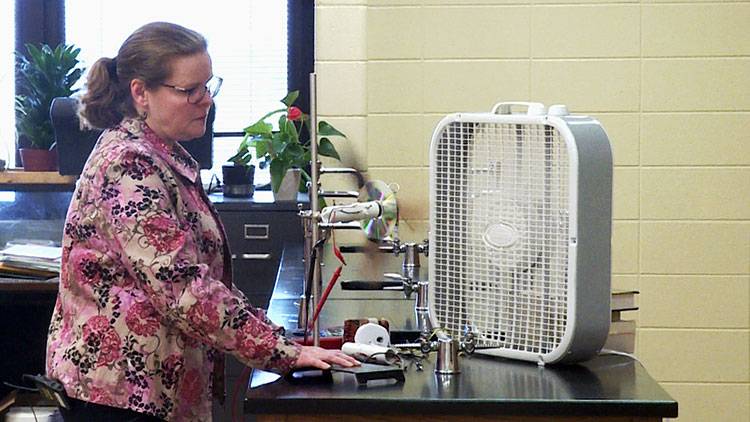 Martha Bowman of Tri-North Middle School in Bloomington demonstrates a project she does with her students that shows how a wind turbine generates electricity. (Rebecca Thiele/IPB News)

According to the eighth grade science standard, students are required to “research global temperatures over the past century” and “compare and contrast data in relation to the theory of climate change.” But some teachers say the curriculum often doesn't cut it.

“You might have a purchased curriculum that’s excellent, but on a topic like climate change by the time the book is published it’s already out of date," says Martha Bowman of Tri-North Middle School in Bloomington. “If we just were to use a textbook, then we would be selling our kids short.”

Instead, many teachers have to wade through endless information online. And this isn’t just an Indiana problem, it’s a national problem. David Evans is the executive director of the National Science Teachers Association. He says it’s only just recently — since 2013 — that we started requiring teachers to teach climate change in this country.

Keith Morey teaches at Centerville-Abington Junior High School, it’s about an hour east of Indianapolis. He shows his students an animated map from NASA that looks at how average temperatures have changed since the late 1800s. At the 2000s, he stops.

“What do we notice most of the Earth is? Hot, well, or above average, right?” Morey asks his class. 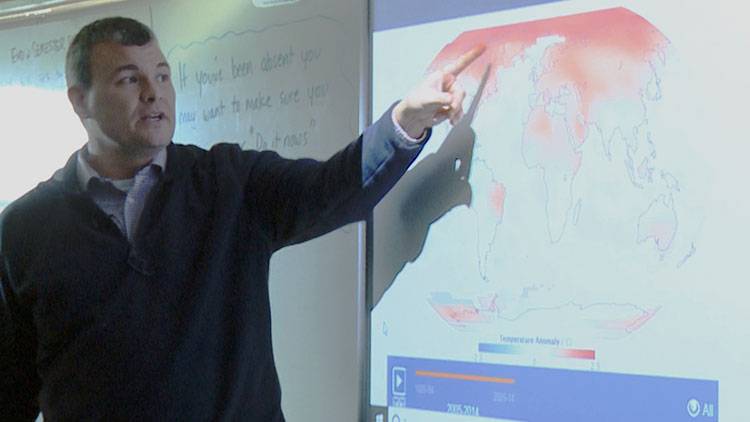 Centerville-Abington Junior High teacher Keith Morey shows his students an animated map from NASA that looks at how average temperatures have changed since the late 1800s. Many teachers we talked to say NASA's website is one of the few places they can go to find quality climate change info that's easy for their students to understand. (Tyler Lake/IPB News)

Many of the teachers we interviewed relied on materials from NASA, but Morey says not everything is as accessible — especially when you have kids at different levels of ability. He says several students, and even some adults, still struggle with the difference between climate and weather.

“Yes, you can make a snowball and still have a changing climate that’s getting warmer,” Morey says.

Kurtis Moffitt teaches at Eastern Greene Middle School, it’s in a rural district about a half an hour southwest of Bloomington. He says sometimes kids will come into class with their own ideas about climate change — mostly what they’ve learned from their families.

“I don’t like to tell kids what to think. I like to give them a lot of information and then we discuss. And just say, ‘What do you think? Where do you stand and why do you feel that way?’” Moffitt says. 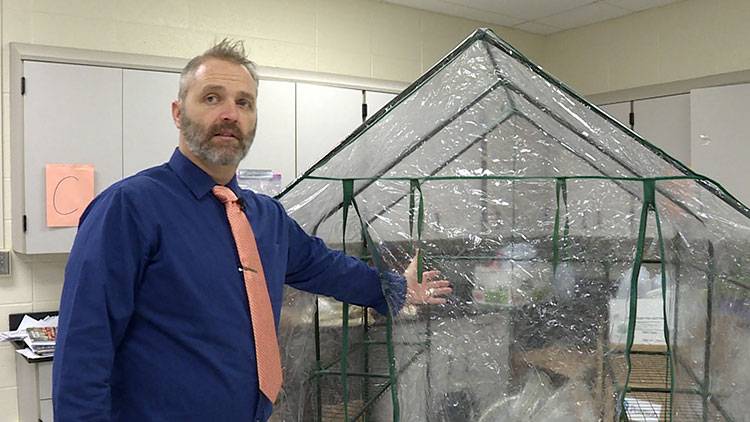 Kurtis Moffitt demonstrates how he uses a greenhouse to talk about climate at Eastern Greene Middle School. (Rebecca Thiele/IPB News)

While we talked to several teachers for this story, it’s impossible to tell what’s going on in every eighth-grade science classroom in Indiana. Lori Baker says she worries about the teachers that can’t dedicate as much time and resources to the subject as she does.

“Especially for a topic that’s already difficult, challenging, controversial, and perhaps not exactly supported depending on where you are,” she says.

Be sure to check out our post on resources and tips for teachers teaching climate change.

Tags:climate changeenvironmental science
Support independent journalism today. You rely on WFYI to stay informed, and we depend on you to make our work possible. Donate to power our nonprofit reporting today. Give now. 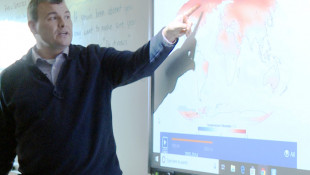 Recently the Climate Literacy & Energy Awareness Network reviewed more than 30,000 online resources to help teachers teach about climate change and found that only about 700 were reputable and could be used in schools.