Recently the Climate Literacy & Energy Awareness Network reviewed more than 30,000 online resources to help teachers teach about climate change and found that only about 700 were reputable and could be used in schools.

To do our part to help teachers find these resources, we compiled a list of links to materials and training opportunities provided by our sources and our own research. We also shared some tips we learned from teachers and other experts we spoke to for this story.

Carolyn Hayes is the executive director for HASTI — the Hoosier Association of Science Teachers, Inc. She says suggests getting kids interested in climate change by looking at how it affects things locally.

“Just to give you an example, it’s not necessarily climate change, but maybe there was some pollution that went on in a river that ran by the school and a lot of fish died,” Hayes says.

“So what caused that? How can we find out the evidence and figure out what was really going on? And could we have done something to prevent it from happening?”

Hayes also suggests having students gather data on a climate topic and present it to other classmates in a forum.

In Keith Morey’s class, every student picks a different city on Earth and finds the average high and low temperature in that city. Then they combine those temperatures to come up with the average temperature of Earth. Morey says they’ll also talk about how water temperatures affect the planet.

“That gives them a better sense of what climate is,” Morey says.

Kurtis Moffitt of Eastern Greene Middle says he has his students divide into groups and read different articles. They talk about different opinions on climate change — from global leaders like President Trump, scientists, teachers, and others — and think critically about who is saying what.

“A lot of it is, teaching these kids — one don’t believe everything you hear. Research, find out what’s going on,” he says.

Moffitt says he also holds classroom debates on climate change. He says sometimes those discussions get heated, but everybody walks out friends.

“It’s neat to see a lot of kids going, ‘There is a problem and we need to do something about it,'” he says.

Moffitt’s class will look at tree rings and learn what the thinness or thickness of the rings tell us about the climate. He also sets up a greenhouse and has students measure the temperature inside and outside the greenhouse — showing the “greenhouse effect.”

Taking Initiative — Whether You're A Teacher Or Not

David Evans with the National Science Teachers Association says if you want to make sure kids are getting quality information on climate change, you need to let the people in power know it's a priority. He says when it comes to education policy, a lot of those decisions are made at the state and local level.

"I think that strong support, supportive teachers, citizens letting their school boards know how important the issue is — is one way to help teachers get the resources that they need," Evans says.

Lori Baker is a science teacher at Center for Inquiry 27 in Indianapolis. She says she learned a lot by attending the Earth Science Information Partners annual conference — which isn’t made for teachers. She says she was surprised at how much scientists can predict about our climate.

“Essentially they can tell when our carbon dioxide emissions reach a certain point, this will happen to this city. I was stunned when I was seeing this,” Baker says.

Baker says scientists aren’t always the best at messaging — so it’s teachers’ responsibility to collect that info and share it with their students.

Tags:teachersclimate change
Support independent journalism today. You rely on WFYI to stay informed, and we depend on you to make our work possible. Donate to power our nonprofit reporting today. Give now. 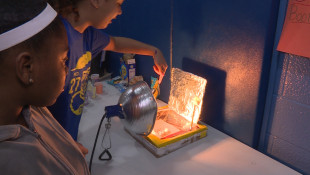 For many students in Indiana, eighth grade is the first and last time that theyll focus on climate change in class. That puts a lot of pressure on eighth grade science teachers to teach the subject right.