The Indianapolis Star reports notices for a Sept. 2 grand opening event were sent out by the company online Thursday. The notices say cars will be available for reservation later that day.

BlueIndy says 25 charging stations will be available at launch. Plans call for 500 vehicles at 200 stations.

Mayor Greg Ballard spokeswoman Jen Pittman says officials are "eager to welcome the first wave of BlueIndy sites." The electric car share was announced in summer 2013, and BlueIndy's owner had predicted it would begin service in spring 2014.

Earlier this week, the City-County Council moved to push back towing five BlueIndy demonstration vehicles that have been parked downtown for months.

Tags:IndianapolisBlueIndyelectric vehicles
Support independent journalism today. You rely on WFYI to stay informed, and we depend on you to make our work possible. Donate to power our nonprofit reporting today. Give now. 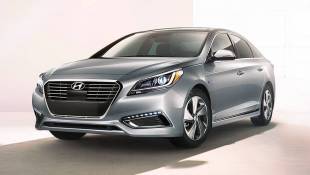 When you think of hybrids and electric vehicles, Hyundai is probably not the first brand that pops to the top of your mind. Yet, the last-generation Sonata Hybrid was the equal of its competitors.